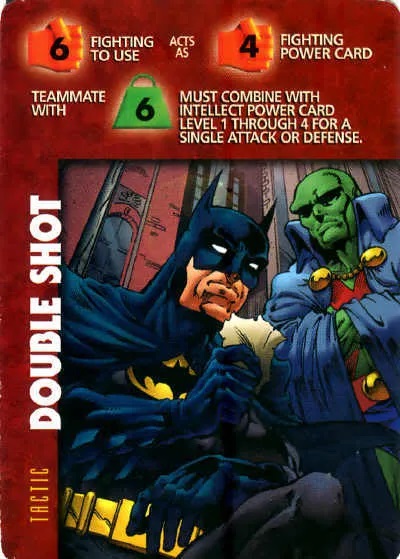 After my lengthy tutorial on the basics of the Overpower collectible card game, this number should be fairly self explanatory. You would use this card if one of the Characters on your team had a Fighting Power Grid Rating of 6 or higher, while a Teammate had a Strength Rating of 6 or higher. For instance, if you were using the pictured duo of Batman and Martian Manhunter, it would work with the Dark Knight's 7 Fighting Rating and the Alien Atlas' 7 Strength Rating. So the Caped Crusader could use this as a 4 Value Fighting attack or defense, which the Martian Marvel would have to elevate higher by combining it with a Intellect Power card. Since J'Onn J'Onzz is one of the smartest strong men in Overpower, his Intellect Rating of 5 could boost the action to as high a Value as 9. Pretty awesome.

Tactic cards emphasized team work, but in order to be effective required careful consideration of which characters were to be used. For instance, if Martian Manhunter were to be KO'd, and no one else on your team had at least a 6 Rating in Strength, the card would be rendered worthless. On the other hand, someone like Orion with a Strength Power Grid Rating of 7 could use the card, but his low Intellect Rating of 2 maxed the action's Value at a middling 6. Better to have the evil Neron on the team, whose Strength Rating of 6 could do the heavy lifting, and Intellect Rating of 8 offered the potential for a devastating 12 Value action. Of course, you're now breaking the optional rule against mixing good and evil on a team, and it will already be at 61 combined Rating points before the addition of a fourth Character.
Posted by Diabolu Frank at 7:10 PM