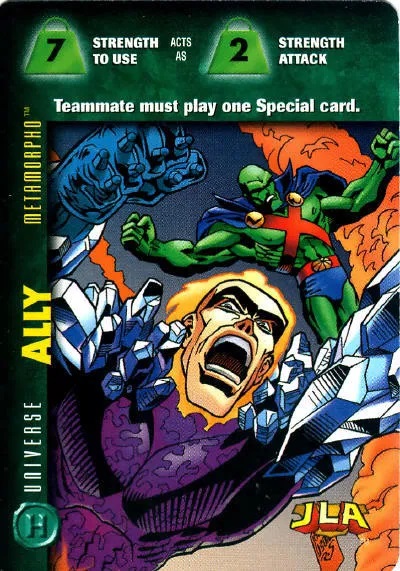 You thought we were done with the Overpower collectible card game? Not quite, my friends, though this may be the last draw!

As I recall, tactic cards were created for the first DC set, and appeared in every one thereafter. This here was an "Ally," which offered the opportunity to have a lesser-known super-person make a "cameo" appearance in your deck to help out you four member team. This one required you to have a Character with at least a 7 in Strength active to launch a 2 point Strength attack. If Martian Manhunter were to call in Metamorpho, another of his teammates would then have to play one of their Special cards. It couldn't be one of J'Onn's Specials (unless another 7 Strength Character on the team had called for Metamorpho,) and the Ally card couldn't be played without the follow-up. There were also 6/2 and 8/3 Ally cards, which saw the attack value increase with the risk of not having a high Rated Character left in the game to use it. I was never big on Ally cards, but I knew others who wielded them well.

The art is by Chuck Wojtkiewicz, an underrated artist that used to work on Justice League America and Europe/International. I met him years back at San Diego, and he was a nice guy. Shame he's pretty much left the industry behind.
Posted by Diabolu Frank at 7:00 PM

A little article of me in http://www.fotolog.com/martianmanhunter/75325304