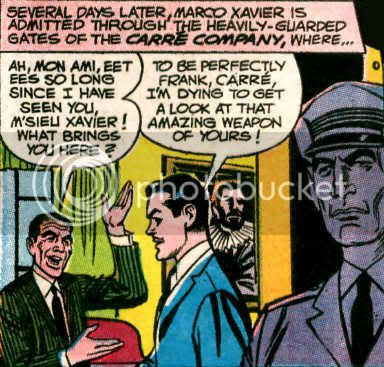 An old friend of Marco Xavier, whose Carré Company developed "the ultimate weapon." The friendship likely ended when the Martian Manhunter, in the guise of Xavier, was found to have stolen a prototype from Pierre Carré to sell to the global crime syndicate VULTURE for $1,000,000. The real Xavier was believed to have been killed when the prototpe proved defective, and Pierre Carré made no further appearances beyond House of Mystery #173 (March/April, 1968.)
Posted by Diabolu Frank at 7:00 PM