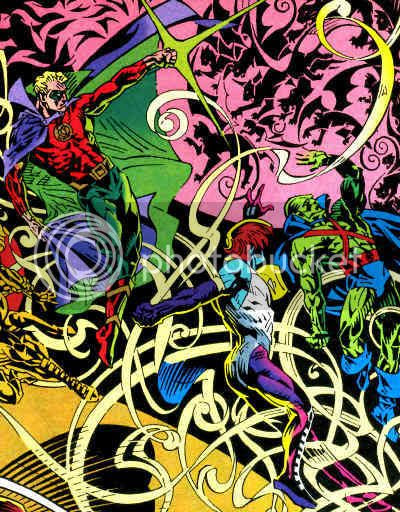 The Mikaal Tomas "Starman" was from a thirty-nine million strong race of blue-skinned alien conquerors. From their base on the dark side of the moon, their invasion force was set to launch against Earth in the 1970s. Mikaal Tomas was possessed of a unique physiology that allowed him to wield a Sonic Crystal device of great power, intended to be exploited on raids to weaken our defenses. Tomas' lover Lyysa had no stomach for the matter, and was executed for trying to warn us of the threat her people posed. This action set Mikaal against his fellows, as he joined the heroes of the world his people had dubbed Meridian to fend off the invasion.

One member, Komak, later reflected for Mikaal, "From the position of Curate you rose to the honored level of Elite Warrior. You were trained and schooled in the art of the fight. Oh, and you learned it well. Too well, in fact, for when you came to Meridian, the troops we sent to reclaim you failed badly... For six months you kept our advance guard at bay... protected an alien world... for whatever reason."

Komak continued, as his attention focused on heroes active during the era, like the Golden Age Green Lantern Alan Scott, and the Manhunter from Mars J'Onn J'Onzz. "Reports that came back to me on the moon base talk of extremely surreal encounters with these champions and others. You met an old hero of this world too. And a new one. Wildtime it sounded. We would have defeated you... finally... eventually. Six months you fought us, but by the seventh you would have died. If our people had had a seventh month..."

It seems Starman's people had bitten off more than they could chew against the planet Daxam, and intended to destroy the world rather than face defeat. However, they had already wiped out a planet dear to the heart of the young Darkstar Chaser Bron, and his resulting retaliation caused the genocide device intended for Daxam to annihilate most of Tomas and Komak's people.

In 1976, Komak found Mikaal Tomas in a disco, compromised by drug addiction and hedonistic excess. Komak also had a weakness for Earth women, and contracted herpes, deadly to his people. His final wish was to engage Starman in battle. Tomas got to Komak before the disease could, though Komak left his mark by somehow melding Starman to his Sonic Crystal. The change did Mikaal Tomas little good when he was drugged afterward by an unknown figure, and lost years of his life being sold from party to deviant party for whatever purposes they deigned.

The luscious art on this story was provided by Craig Hamilton, best known for the 1980s Aquaman mini-series that introduced that hero's short-lived blue "camouflage" costume. The combat-as-sex subtext was played out magnificently in some serious man-on-man action that would have done Jack Miller proud.

In fact, writer James Robinson eventually outed Mikaal Tomas as a bisexual, which would have been cooler if he hadn't lifted this entire retcon from Nicholas Roeg's "The Man Who Fell To Earth." In that movie, the bisexual David Bowie plays an alien who comes to Earth in hopes of saving his dying world, but instead gets lost in drugs and hedonistic excess. Yes children, British writers are overrated, and directly referencing Bowie doesn't turn plagiarism into homage. It also poos all over The Delano Theory of Seminal Integrity in Super-Heroic Fiction. Then again, that belief throws my lot in with right-wingers like Bill Willingham, so maybe I'm just loco on that front. Besides, I really want Robinson to follow-up on that Martian Manhunter teaser in his new Justice League book, and I do generally like his writing, so I best shut my face...
Posted by Diabolu Frank at 7:00 PM