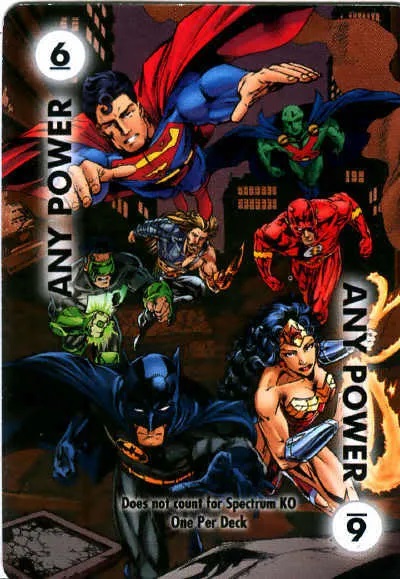 "Power cards are the basic unit of attack and defense in Overpower" As Poker has suits, Overpower has Power types. Instead of hearts, diamonds, spades and clubs, it has Energy, Fighting, Strength and Intellect. If you look at the Martian Manhunter Character card, you can see he has a Rating in each of these suits. Power cards have values of 1-8, but since Martian Manhunter only has a Rating of 4 in Energy, he can only use Energy Power cards with values of 1-4 to attack or defend himself.

You might wonder why anyone would bother with Power cards of low Value. Well you see, unlike Poker, you build your own deck of cards to play with, and pit it against your opponents' deck. At the start of the game, each of you draws an eight card hand. Any duplications must be discarded immediately, and you can't keep more than one Power card of the same Value. That means if you draw an Energy Power card and an Intellect Power card with a Value of 4 each, you can only keep one. Martian Manhunter can use either, so you have to determine which will be most useful to his teammates or your strategy, and keep that one.

Each player takes a turn performing an action, which may include using a Power card to attack their opponent. Your opponent will usually have to target one of your characters, in this case Martian Manhunter. If your opponent attacks J'Onn with a Power card valued at 7, Martian Manhunter can use a Strength Power card with a Value of 7 to defend himself. If you decided to hold a 7 Intellect Power card for one of J'Onn's teammates (since he can't use an Intellect Power card over 5,) and have no other means to defend the Martian Manhunter, our hero will be hit by the attack. Since most characters can only take 20 points of damage, that leaves J'Onn with only 13 points of injury he can sustain before being knocked out. Also, if J'Onn takes hits from two other Power card suits, regardless of their point value, he will become the victim of a Spectrum KO. That's where even low Value Power cards are useful. One a character is knocked out, they are removed from the game. You start out with four characters, three active, and one safely in reserve. If Martian Manhunter is knocked out, the reserve character takes his place. One way to end the game is if all four of a player's characters are knocked out.

There are two types of Power cards that are not part of the four basic suits. MultiPower cards are wild, and can assume the properties of any Power card type. Any-Power cards, like the one spotlighted here, have no Power type. Since this one has a Value of 6, any character with a Ranking of 6 or more in any Power type can use it to attack or defend. While its Value of 6 and versatility can be useful, its useless in effecting a Spectrum KO. You'll also note this card is limited to one per deck.

Though the card has no art credit, this one was obviously drawn by Howard Porter, likely with John Dell inking. The same image was used on the display box and in advertising.
Posted by Diabolu Frank at 11:58 PM