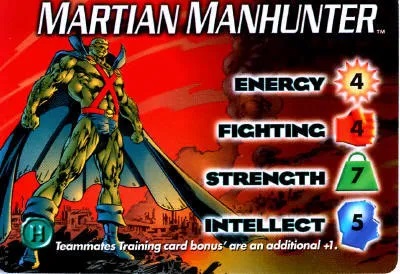 Alright, to explain the Overpower Collectible Card Game, we begin with Characters. Every player puts together a team of four Character Cards. Depending on an optional rule, all these characters may have to be either heroes or villains. J'Onn here is a Hero, as indicated by the "H" symbol at the bottom left of the card. Every character has a Power Grid of either 3 or 4 Power types, depending on what version of Overpower you are playing. All DC Characters have four Power types: Energy, Fighting, Strength and Intellect. They are then assigned a Rating in each Power type, roughly based on their abilities in the comics, and ranked from 1-8. As you can see, Manhunter is a versatile Character, with solid Ratings across the Power Grid, and the penultimate limit on Strength.

Martian Manhunter also has an Inherent Ability, a special power he can use just by being present on a team. His is "Teammates Training card bonus' are an additional +1." Training cards allow characters with a Rating of less than 5 to increase the impact of an attack in a Power type they're normally weaker in. As you can see, J'Onn can not only get the most out of his own Training cards based on his Power Grid, but also enhance his fellows'. You can best use Martian Manhunter in decks emphasizing Strength and/or the full spectrum of Powers. However, especially in tournaments, the total point value for all the characters' Ratings on your team matter. Since J'Onn is a 20 point character, you have to bring in a much lower point character for, say, a 60 point team. Your team will be disqualified if they run over an allotted point value. Also, if you play Manhunter against an 80+ point team, they will most likely have characters with 8 Ratings, where the Martian's highest Rating is a 7, limiting his offensive and defensive abilities against them.

While there are no artist credits on the cards, it's obvious Sal Velluto drew this one. Because of a uniform flatness in the coloring of the DC character cards, the rare instances of more vibrant tones like those found here really stand out. The combination of detailed rendering and hue makes this one of the best looking cards in Overpower, as far as I'm concerned.
Posted by Diabolu Frank at 11:59 PM