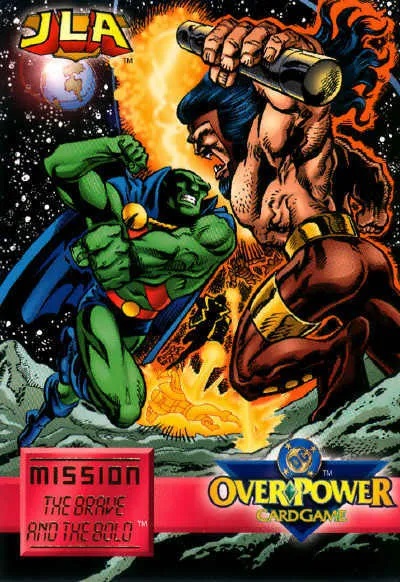 Each Overpower player must have a set of 7 Mission cards. These cards tell a short story involving a set of heroes and villains. They blessedly need not be the same Characters you're playing, since there was only one Mission set produced for the JLA expansion, and then there's mixing Marvel Characters in to consider.

Mission cards serve two purposes. The first is to determine which Event cards can be played. Events are optional cards that can be placed in a deck. If an Event card is drawn, it immediately effects both players, rather than being played as part of a hand. Events are directly tied to Missions, and can only appear once per deck. It should be noted that Event cards are printed like most any other, on pliable matte stock with rounded corners. Mission cards are separate from the deck, and are printed on more rigid glossy stock with square corners.

Another way to win a game of Overpower is through Venture, the second and primary purpose of Mission cards. At the start of each Battle, meaning one turn for each player, one or more Mission cards are "bet" on the outcome of the battle. It's up to each player to decide how many Mission cards they choose to Venture per battle, and they need not Venture the same number. One card minimum must be Ventured, and for every card over two Ventured, your opponent gets to draw a card from their deck. The first player with all their Mission cards "Completed," as in accumulated winning bets, takes the game. The first player with all their Mission cards "Defeated," accumulated lost bets, is out of the game. The victor of each battle is determined by who deals the highest number of Value points of damage to their opponent(s.)

The "The Brave And The Bold" Mission's story involves Darkseid trying to take over the Earth after the destruction of his home planet, Apokolips. The New Gods Orion and Mr. Miracle warn the Justice League, who battle Darkseid's forces on our moon. "--Having beaten the Female Furies, the League now clashes with a squadron of Parademons, led by the brutal Kalibak. With strength like Superman's and an unquenchable lust for battle, Kalibak is a terrifying enemy... Yet the heroic Martian Manhunter battles him alone and unaided, buying time for the other heroes to smash Darkseid's forces and invade his fortress!" There were 5 Event cards tied to this Mission, but none mentioned Martian Manhunter, so we won't bother with them.

As usual, there are no art credits on this card. I strongly suspect it was drawn by Mike Collins, based almost entirely on how much it looks like his work on Martian Manhunter Special #1. Do note the Ray, one of J'Onn's charges from the Justice League Task Force, in the background.
Posted by Diabolu Frank at 11:59 PM