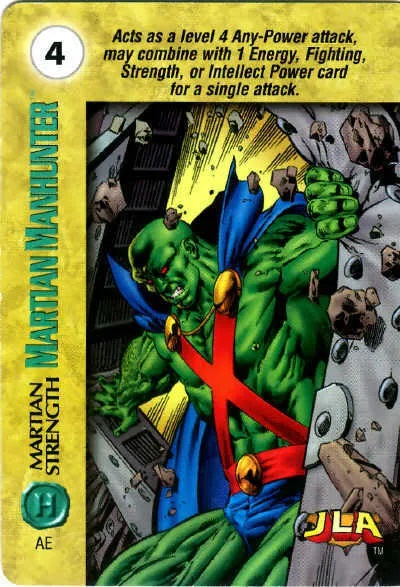 Clearly not Silver Age fans, the Overpower game makers bypassed "Alien Atlas" for the more generic "Martian Strength." This card acts as a level 4 Any-Power attack, which would be lame in and of itself, but could be combined with a Power card. Given Martian Manhunter's Power Grid, that could mean an 8 Value Energy or Fighting attack, 9 Intellect, or 11 Strength. That meant a successful Strength hit could halve its target's life and offer serious points toward a Venture win. It also potentially meant a serious assault in a Power type J'Onn was weaker in, enabling an easier Spectrum KO. Finally, since this Special was unlimited, the Martian Marvel could routinely ramp-up any given attack throughout his time in the game, of just offer an additional attack unhindered by a Power type, a major asset. The Character doesn't draw attention to himself with any 8 Ratings, has a bunch of defensive cards, delivers massive attack points, and helps his entire team score Spectrum attacks. The only drawback is those humongous thigh muscles Sal Velluto drew so provocatively. At least that Silver Age homo-eroticism remained intact.
Posted by Diabolu Frank at 7:00 PM

Seriously! I guess being a shapeshifter and all you can get away with that, but its kinda creepy looking. I think the left upper leg as as as thick as his torso!