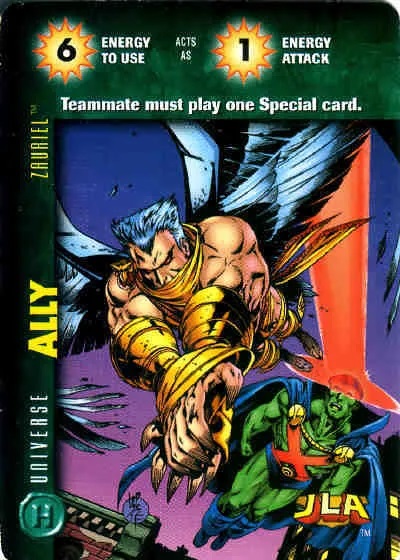 Here's another card from the DC Overpower collectible card game, this one being of the Ally type. Where Marvel produced so many sets of Overpower that Characters no one has ever heard of were playable, powerhouse DC fixtures like Black Adam, Cheetah, Firestorm, Gorilla Grodd, Guy Gardner, Ocean Master, Lady Shiva, Mr. Mxyzptlk and more were relegated to these lousy nuisance cards. Seriously, Marvel used Ally cards for supporting characters like Mary Jane Watson-Parker, and gave Character cards with Specials to Crux, Grey King, Landslide, Mercury, Rapture, and Xaos. Who, who, and who again? Further, the lion's share of Marvel cards looked like they were drawn by interns on their lunch break, possibly reproduced directly from a cocktail napkin. This one is by Howard Porter, the talent who turned JLA into a hit title. Maybe there's something to be said for quality over quantity?

Also note that even though Zauriel has allied himself with Martian Manhunter on this card, J'Onn J'Onzz's Energy Rating of 4 on his Power Grid prohibits his using it. Guess other then-current JLA members like Superman, Green Lantern, or Flash* would have to join them. Tricky to pull off, and not worth the trouble when you figure I never had a use for Zauriel, in or outside the game.

(* ...and Dixon, though none of Wally's stats are above a 6, his selection of specials makes him one of the best DC characters to play in Overpower.)
Posted by Diabolu Frank at 7:00 PM

Zauriel never did anything for me either. He seemed like a very forced character...like they wanted to be edgy and weird and on the edge, and decided to bring a sort of Psudo-religious bent to the books. I dunno...it seemed lame to me.

As I remember it, Grant Morrison wanted to use Hawkman. Since he was "dead" and his continuity a shambles, Morrison felt it was time to create a Modern Age Hawkman from scratch. However, DC always intended to bring the prior Hawkman back, so we got stuck with plain Zauriel. Worse, the only readers that seemed passionate about the guy were evangelicals singing his praises on message boards. They couldn't even kill him off, because, y'know...