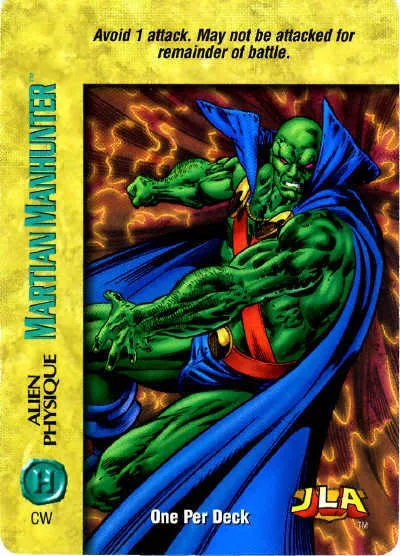 Unlike "Malleable Form," this Overpower Special card is extremely useful in the game. Not only is it a get-out-of-jail-free card for any single attack against the Martian Marvel, but it protects him for the rest of the battle, regardless of whether the Alien Atlas does some attacking of his own. Since Martian Manhunter has quality offensive Specials, having this card in play can win a game. Say J'Onn is the last Character standing on your team and "Alien Physique" is available to you. Venture as many cards as you can, and regardless of how many additional cards your opponent may draw, you have potentially neutralized them for the entire battle. Either they Concede beforehand and you secure a slew of Mission cards, or you need only score damage to win them outright. Of course, J'Onn has to be directly attacked first, the Special could be neutralized by another Special, and a stalemate likely leaves your opponent stronger for the next battle. Still, "Alien Physique" is boss, and limited to one per deck because of it.

Artist Sal Velluto seemed to like bringing out the "alienness" of the Martian with awkward body language, and helped get the big upturned collar look going before JLA blew up. His abuse of the Banana Hammock From Mars endeared him to few Overpower players, though.
Posted by Diabolu Frank at 7:00 PM

The exception that proves the rule... ;)