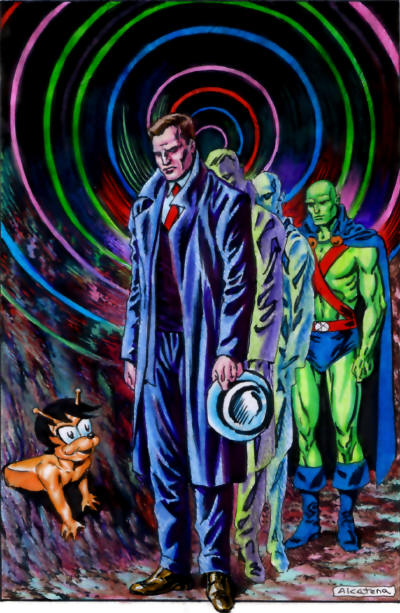 Enrique “Quique” Alcatena is an Argentine comic artist who started in the industry around 1975, breaking out in the local and English markets in the early '80s. He moved into the U.S. market in the early '90s, making a name for himself through his finished art on Tim Truman's Hawkworld and The Spider prestige mini-series. From there, he took on odd projects for Marvel and Dark Horse, including a brief run as artist on a Fantastic Four animated series tie-in. He also did a lot of work with writer Chuck Dixon on Batman-related annuals and projects. In the early '00s, the pair moved to CrossGen for Alcatena's final major comic work, Brath. I've always appreciated his unique and very European sensibilities, especially on fantasy and old world "period" projects. Plus, he has amazing taste in subjects! It's great how he recalls the rainbow waves transformation gimmick from the "Manhunter from Mars" strip, and I enjoy the contrast between the gleeful Zook and the solemn police detective (with bonus Silver Age J'onn J'onzz in the background.)
Posted by Diabolu Frank at 5:15 AM

The nod to the rainbow transformation is just icing on the cake.

This is a very nice piece. The serious solemn of the man hunter is stand out present. But it seems to be a sadness there as well.

I would have left Zook out the picture, but maybe Zook is what J'onn needs at this moment.

The rainbow effect and the whole style of the artist has really drawn me in and it's comforting in a way I can't explain. Nice post