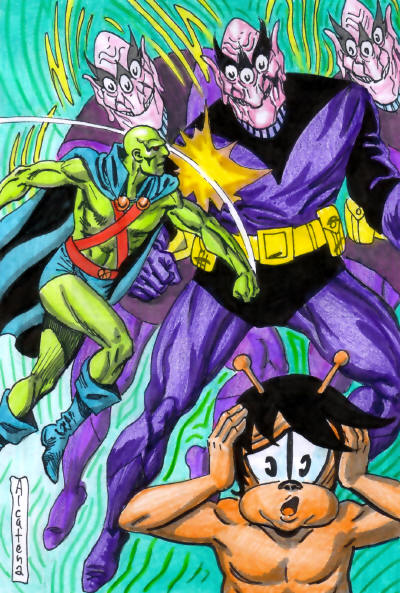 Appropriately enough, 2013 was a banner year for the 3-In-1 Man. At least three times as many artists drew the character as I ever knew of before, meaning the one artist who co-created him, Joe Certa. Enrique Alcatena decided to draw Thantos by March of last year, and was quite possibly the first illustrator to do so since the villain's debut in 1967. I was unaware of that having happened until many months later, after I'd already gotten Thantos commissioned at Comicpalooza and my buddy “Illegal Machine” had redesigned the character as seen here. However, I ran the Ill Mac's first pass on Thantos in April, several months after he had doodled the character for me on a whim. So, was Alcatena or Ill Mac first to revisit Thantos after 46 years in limbo, or are we all fooling ourselves about the obvious 3-In-1 Man Zeitgeist?
Posted by Diabolu Frank at 12:00 AM

Really great rendering of Thantos. The background's really cool, too!