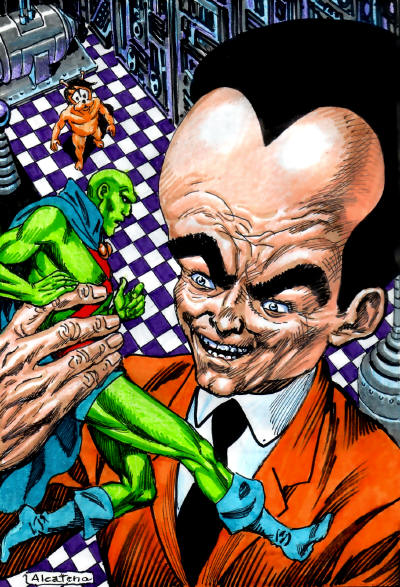 On most of these pieces, I've taken a cue from an instance of Alcatena's having written the title of a story he was adapting on the actual art in titling these spotlights. I can't do that here, because Alcatena is referencing two different stories, "The Man Who Destroyed J'onn J'onzz" from Detective Comics #322 (December, 1963) and “The Giants Who Slept 1,000,000 Years” from House of Mystery #153 (September, 1965.) These are two of the finest Martian Manhunter stories of the Silver Age, and not coincidentally, both feature the menace of Professor Arnold Hugo. Zook joined the Alien Atlas in his first encounter with the Batman villain, where both were lured to the lab seem above. In their second encounter, the Manhunter faced a giant-sized Hugo on his own. By combining three of my favorite Sleuth from Outer Space characters, Alcatena also offers one of my favorite pieces in this series! Be sure to check out more at Quique Alcatena!
Posted by Diabolu Frank at 3:29 AM

Love the perspective, love the coloring. This is awesome!! I could see this as a cover for a collected trade of House of Mystery/Detective Comics.