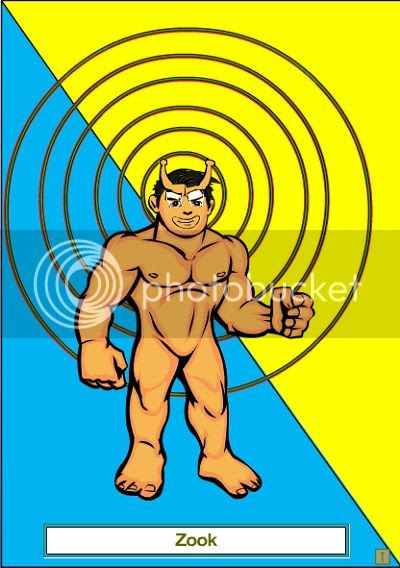 I've previously spoken highly of Victoria Lynn Schmidt's 45 Master Characters: Mythic Models for Creating Original Characters [Revised Edition] using Martian Manhunter and Commander Blanx* as examples of how her archetype theory could beneficially inform the work of future comic writers. The book focuses on primary protagonists and antagonists, though the structure would be sustainable across an ensemble so long as they fit the same molds. Schmidt also devotes a couple dozen pages to supporting characters, and in the absence of 45 Minor Characters: Creating Original Subordinates, this is an area where the author falters.

I've been using HeroMachine 2.5 to build the art for these articles, because I like how it reflects developing a character from the old school roleplaying game model. I've also toyed with 3.0, but it's almost too flashy for my intentions. I tried to do a Zook in both, and neither could get the job done without serious tweaks in MS Paint, and even then I think he looks off. That's how Zook was processed through Schmidt, as well. 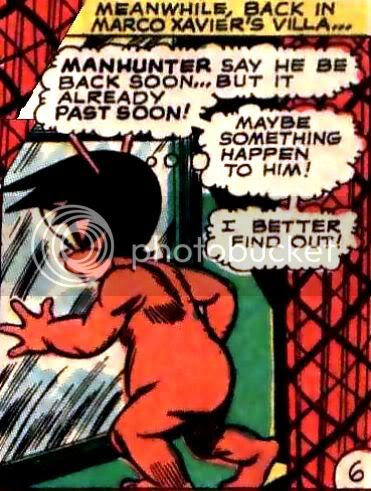 The author offers three sets of supporting character types: Friends, Rivals, and Symbols. Zook clearly belongs in the former, which has four sub-categories: The Magi, The Mentor, The Best Friend and The Lover. The quartet only get eight pages of dissection, and the types are vaguely sketched. Common sense would assign Zook the role of Best Friend, but none of the avenues for conflict offered by the author (ineptitude, jealousy, fear, neediness, poor judgment) match Zook's method of operations. Zook was actually quite competent and generous of spirit, yet while very helpful, was still a sidekick in need of motivation through the Manhunter from Mars.

As defined by Schmidt, Zook better fits The Lover as embodied by Toto, who "has Dorothy's unconditional love, and she risks all to save him." The roles were reversed though, as J'onn J'onzz had Zook's abundant love and support, which the Alien Atlas was ultimately ambivalent towards. J'onzz kept Zook cooped up in a mountain hideaway while he maintained a life as a police detective in Middletown. When J'onzz moved to the Mediterranean to pursue Vulture, he left Zook behind in the States without explanation. Most of Schmidt's analysis of The Lover type is geared toward an intimate, romantic relationship, which extends to her suggested story developments. However, one section is key: "You wouldn't think badly of a hero who snubs her friend when she's busy, but you'd think badly of a hero who snubs her lover for any reason... we need to know, because it tells us something about the hero's personality." Why couldn't J'onn return Zook's love and keep his pet by his side, since Zook was a proven asset? 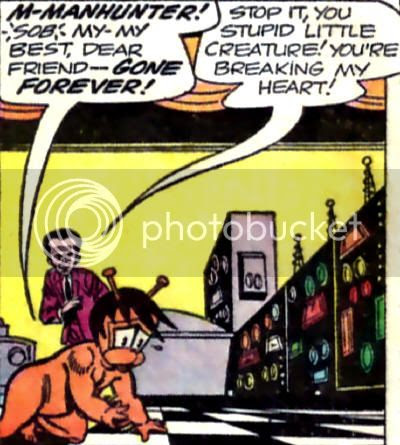 Schmidt referenced characters from Seinfeld a number of times in her book, but her structure doesn't support the core cast of the series. Jerry is the titular hero of the show, so he would be classified under the major archetypes. Jerry is the straight man, and probably the least interesting and least funny presence on the show, but everything revolves around his life. George is the Best Friend, but despite occasional lapses into a physical/romantic relationship, Elaine is not The Lover to Jerry. Kramer is only a proximity friend to Jerry, the oddball next door neighbor. Jerry desperately needs his supporting cast, and none of the three primary members have sustainable relationships with one another, only through their mutual friendships with Jerry. Neither George nor Elaine are strong enough to support their own ongoing series, but Kramer has a wholly separate circle where he could serve as the lead protagonist. However, in the context of most Seinfeld episodes, Kramer is subordinate to Jerry and is presented through his tangential relationships to Jerry's other supporting characters. They can't all be Jerry's Best Friend, and they don't fit the other three Friends archetypes, so how do you write Seinfeld under Schmidt's model?

The same problem is found here. Captain Harding could have been The Magi to John Jones, since he was the main vehicle for exposition in the Middletown stories, but what role did Diane Meade play? Even if she were a legitimate love interest, how would that affect Zook as The Lover? Surely we need a better constructed model for supporting casts, but Schmidt does rightly point out that the relationship between Zook and J'onn needed to be better explained, especially as it wound down and Zook vanished altogether.

* I also got started on Despero, but I guess that'll sit in a queue until December.
Posted by Diabolu Frank at 1:27 AM