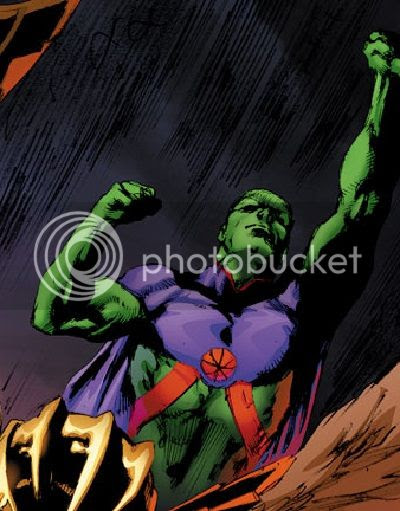 In the wake of FOREVER EVIL, the Justice League of America’s mission has come to an end – so where do they go from here? No one’s survival is assured! This issue is also offered as a combo pack edition with a redemption code for a digital download of this issue.

So hey, when you were buying 50+ variant covers for the debut issue and 3+ for every consecutive issue, did you know that you were investing in a 14 issue maxi-series by two different series writers and probably a dozen series artists in which nine issues were direct branded tie-ins to two crossovers (not counting the four Villains' Month stunt issues that really had little to nothing to do with the title?) I've bought every properly numbered issue, but only bothered to read four or so. Those Martian Manhunter back-ups sure were a disappointment, since what little they revealed about the character wasn't to my liking, but mostly they were just pointless expansions of the lead stories. I've been flipping through the Forever Evil tie-ins, and after reading the first, it seems like the subsequent ones spin their wheels in the exact same mud where I left off. Maybe Geoff Johns started this with the best intentions, and got forced off by Diane Nelson & company, but this entire volume turned out to be meandering ancillary material for other projects, and now we get some half-assed coda? And the sad truth is, since I'd already started following this crap, I'd have probably bought #15 by the next creative team. Luckily, DC had the courage/greed to give me a jumping-off point instead, and I'm frigging taking it.

In the aftermath of FOREVER EVIL, Adam Strange is caught up in an adventure across the far reaches of the cosmos that will unite an unexpected team of heroes including Supergirl, Hawkman, Green Arrow, Stargirl, Martian Manhunter and Animal Man – but if they’re on the team, who exactly is Canadian? Plus: Don’t miss the debut of a new Canadian hero who will have a huge effect on the group!

Even after my fairly definitive rant about how I wasn't going to buy this book, I still had a "but" in my back pocket. Maybe the price would come down to $2.99? Maybe there would be a tie-in Martian Manhunter book? Nope. I still like Mike McKone's new art style, which reminds me of Dusty Abell, but y'know, I didn't like Abell as much as classic McKone, knowwhatImean? I'm guessing the JLU will take part in the start of a new Rann-Thangar War, which would explain Hawkman's absence from the cover but clear involvement per the synopsis. I definitely want to see the Alien Atlas all up in that, so when the trade paperback arrives, I'll probably be there. Until they get around to the Secret Origins issue for the Sleuth from Outer Space, I'm done with DC monthlies.

By the way, in the final issue of the series, Stormwatch is rebooting to its New 52 relaunch incarnation of Adam-One, Jenny Quantum, the Engineer, Apollo and Gimpy Midnighter. Maybe they'll use the weekly event series Future's End to do the stuff they meant to do three years ago?
Posted by Diabolu Frank at 4:49 AM

It is hard to have much faith in the leadership at DC. They have wasted good opportunities, like Stormwatch. I think that there should perhaps been more of a full reboot of the DC Universe and an effort to focus less on continuity and more on character. J'Onn J'Onnzz has managed to emerge intact from the problems DC has had with his books and I will give Justice League United a try.

However, I can't blame you for your cynicism, Frank. My quip that if J'Onn was real, he would be farming his resume out to Marvel and other places is particularly apt. I think that what the DCnU lacks is vision. Without a vision of where to go, I fear that writers and editors are trying to figure things out as they go along. I think DC could use some leadership that thinks long term and not just up to the next big event. I am not holding my breath while waiting for it.

I haven't bought a DC comic in over a year, so I'm due for caving in and buying something. Adam Strange seems to be the focus of JLU #0 is just too much for me to resist. But, yes, a rebooted Rann-Thanagar War makes sense. I only bought issue 1 of JLA, so at least I can justify things in that regard.

I had thought Adam Strange was the Canadian hero, but I guess they scrapped that idea. (Just more evidence which makes me believe they are making it up as they go along.)

Guardedly hopeful and rather "meh" about the whole endeavor. I'm sure I'll be disappointed, but what the heck, why not.

I wouldn't have figured JLofA had the slightest hope of being your bag Liss, but JLU seems much more your speed. Hope you like it. Hope I do too, as a collected edition.

Will, they're already rebooting the New 52 Stormwatch for a second try. Already. Seriously. Einstein had a famous quote about that sort of thing.

I am hoping that JLU will be good enough to lure you back to floppies.

I knew enough to stay away from JLA (outside of buying a New Hampshire cover for a friend from NH).

And when Luthor comes on board I am off JL.

DC continues to trip over itself.

I hate to say it, but the most interesting to me issue of Justice League was where J'Onn beat the team of Superman, Wonder Woman, Batman, Green Lantern, Aquaman, Cyborg and the Flash in a flashback and said that they were not ready.

I liked some of the back ups in JLA, particularly where J'Onn visited the White House.

I think Adam Strange may be a Canadian as is Booster Gold. (Add him and Rip Hunter to the Justice League United and you can have adventures in time and space.)Maybe throw in Green Lantern Simon Baz as well.

Frank, I think that going with a full reboot and not doing the five years later thing and ignoring continuity would be good. We could see how people would react to the emergence of super heroes. Instead, DC tried to reboot and keep a ton of stories.

I think that it would be bolder to start from ground zero. Maybe J'Onn could have been shown working with both Stormwatch and the Justice League (perhaps in a consulting role). Oh well, I am not going to be surprised if the entire line gets rebooted in the next decade.

DC always takes the half-measure of a partial reboot, and reaps only a portion of any potential gain as a result.

"Hey kids, get on the the fifth floor of DC Comics!"
"Don't you mean the ground floor?"
"No. We've already done the landscaping, poured the foundation, and established all the basic parameters of the building. You can start on the fifth floor."
"Can I look around the first four floors to get a sense of the building as a whole going forward?"
"No. It's an office building. A very exciting office building! Join us as we construct more offices on the fifth floor without having all the exterior walls up and with a strong chilly wind blowing through it at unexpected intervals and enjoy the bird droppings everywhere."
"No. I'm just going to jump off this... ledge(?)... type opening over here."