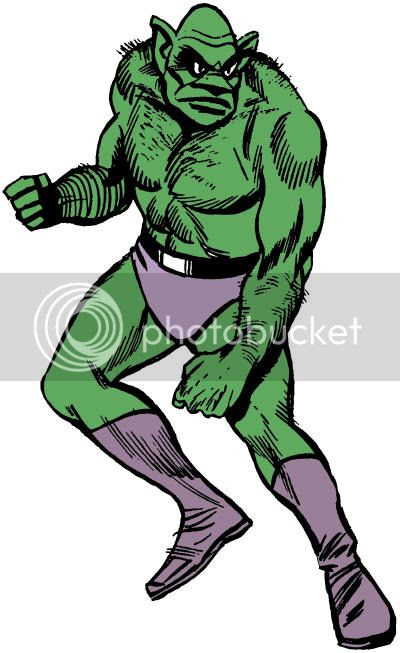 History:
S'tor (not to be confused with S'vor) was a normal Martian of unrevealed background who acquired two capsule-shaped space ship of unknown origin and joined six other Martians on a trip to Earth's moon. Acting as a scout for his group, S'tor landed his single seater on terra firma and assumed the form of a more simian Martian Mountain M'mannix to go on a rampage near the Deauville Beach area. His intention was to test the strength of the Earthlings in advance of an invasion attempt. S'tor was confronted by J'onn J'onzz, the Manhunter from Mars, leading to a brief fight. S'tor managed to evade capture, escaping back to the moon in his capsule. Two ships soon returned, with seven Martian Marauders spoiling for a fight. With modest, indirect assistance from his sidekick Zook, the Manhunter sent the lot packing back to their ships, which crashed into one another while trying to maneuver away from further pursuit. The capsules were utterly destroyed, and the Marauders were never heard from again.

Powers & Weapons:
While the Martian Mountain M'mannix has been acknowledged as being much more powerful than a normal Martian, and J'onn J'onzz has at times assumed all the strengths and weaknesses inherent in a life form that he has shapeshifted into, S'tor enjoyed no such benefit. Despite his size and appearance, S'tor demonstrated no greater abilities than the Alien Atlas, and may in fact have been handicapped in some unexplained fashion. While unknowingly exposed to an area with an open flame, the seven Martian Marauders in the form of M'mannix proved inferior to J'onn J'onzz in combat. Apparently, passing near a small flame held by Zook ahead of the Manhunter was enough to exhaust most of the Marauders' capabilities without effecting J'onzz. Perhaps other factors contributed, such as J'onzz's skills, greater time spent empowered on Earth, or some other unrevealed quirk/precaution that favored the Manhunter. Regardless, the Marauders appeared to rely solely on brute strength of levels equal to or less than common for their natural species, to their detriment.

The origins of the Marauders' capsules was not revealed, although they may have been Martian, based on S'tor's asking of J'onzz "How did you manage a trip to Earth, before the invention of space ships on our planet?"

Created by Jack Miller & Joe Certa
Posted by Diabolu Frank at 3:37 AM

Frank, thanks for the recent posts. It is interesting to see what Zook did in the past. Sorry that I have not commented much of late, but I have been busy.

Incidentally, I have a possible Martian sighting on DC's Earth 2, where Jim Olsen reveals that an "alien, possibly a Martian," may be trapped in a government facility. Here is the link for the preview -- http://www.newsarama.com/19961-more-on-the-batman-of-earth-2-in-earth-2-19-preview.html

But I don't want an Earth-2 Martian Manhunter! Waaaahhhhh!!!