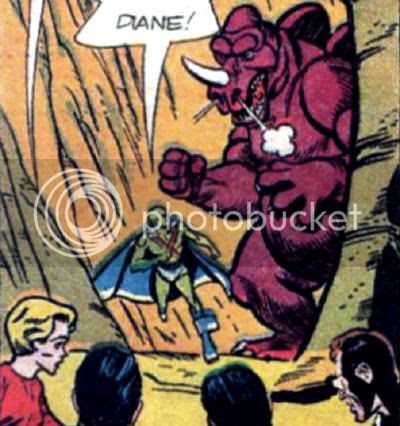 As recorded on cave etchings, in ancient times the sorcerer Marlon created a rampaging creature "to wreck havoc among the people." The stone carvings also described at least three other beasts of unrevealed origin with the potential power to stop Marlon’s creature. In modern times, archaeologists discovered the caves in what was now a remote resort area. Within, they excavated the petrified creature from the cave floor. A lightning bolt happened to strike and revive the creature, which began to terrorize the archaeologists. 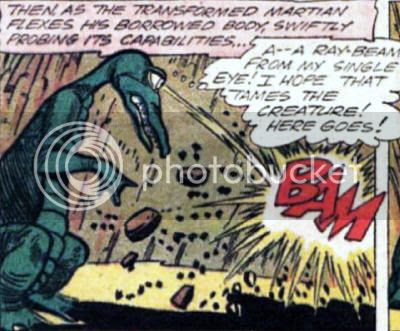 The Manhunter from Mars was contacted in Middletown, and managed to fly to the site, temporarily contain the creature, and decipher the ancient script on the cave wall. J'onn J'onzz was unable to read a deteriorated area that identified which of several beasts could halt what eventually became dubbed "the juggernaut," so he randomly selected one and used his shapeshifting powers to become "this one-eyed beast." In this form, J'onzz could fire a destructive ray-beam from his eye, but it proved ineffective against the juggernaut. Worse, the one-eyed beast was physically weaker than the juggernaut, who nearly crushed J'onzz's throat before he could return to his Martian form. 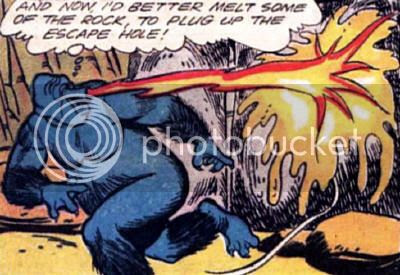 The Manhunter next tried "that funnel-mouthed beast," which turned out to shoot a consistent stream of flames from its nose. "The flame-throwing creature is powerless against the beast, too!" Even with flames that could instantaneously blast or melt large rock slabs, J'onzz was soon forced to run from the fight. Theorized as a byproduct of the flames burning inside the funnel-mouthed beast's body, J'onzz was unable to revert to his Martian form, and was lethally vulnerable to conventional gunfire in the adopted form. Unable to speak, J'onzz was saved through his rapport with his otherdimensional sidekick Zook, whose antennae could detect the true nature of the Martian shapeshifter, then froze him to squelch the flames within. 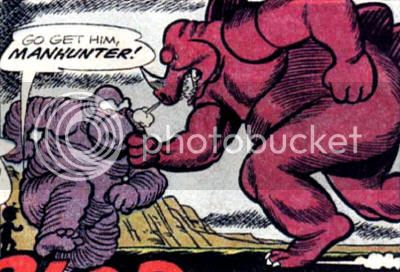