The Reverend Delroy and Mark Hampton 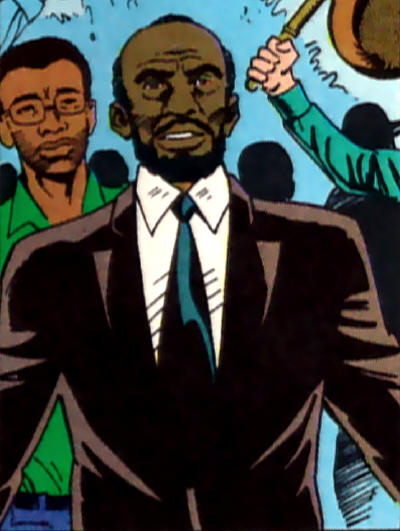 Reverend Delroy was the spiritual leader for the First Baptist Church of Wilmington, Alabama in 1963; which was destroyed in an arson attack. Delroy learned that the white community, led by Chief Oxblood Banner, intended to blame the Negroes for the fire if they attempted to peacefully demonstrate against the act of violence. Following the passing of a little girl caught in the fire, Mary Lou Wilson, the protest drew participants from many surrounding states, "as far away as our nation's capitol."

Mark Hampton was associated with the Students for Non-Violent Change and based out of the University of Chicago. Hampton was working with Reverend Delroy to use his church as the headquarters for new voter registration of Negroes in the heavily racist small town before the arson, and helped rally the protest held afterward.

There are always heroes in our own world, and I am glad to see that there were parallels to some of the heroes of the Civil Rights Movement in the DCU. (I am not sure when the Martian Manhunter was first active on Earth in the current continuity, but this story is one that could work in the new timeline.)