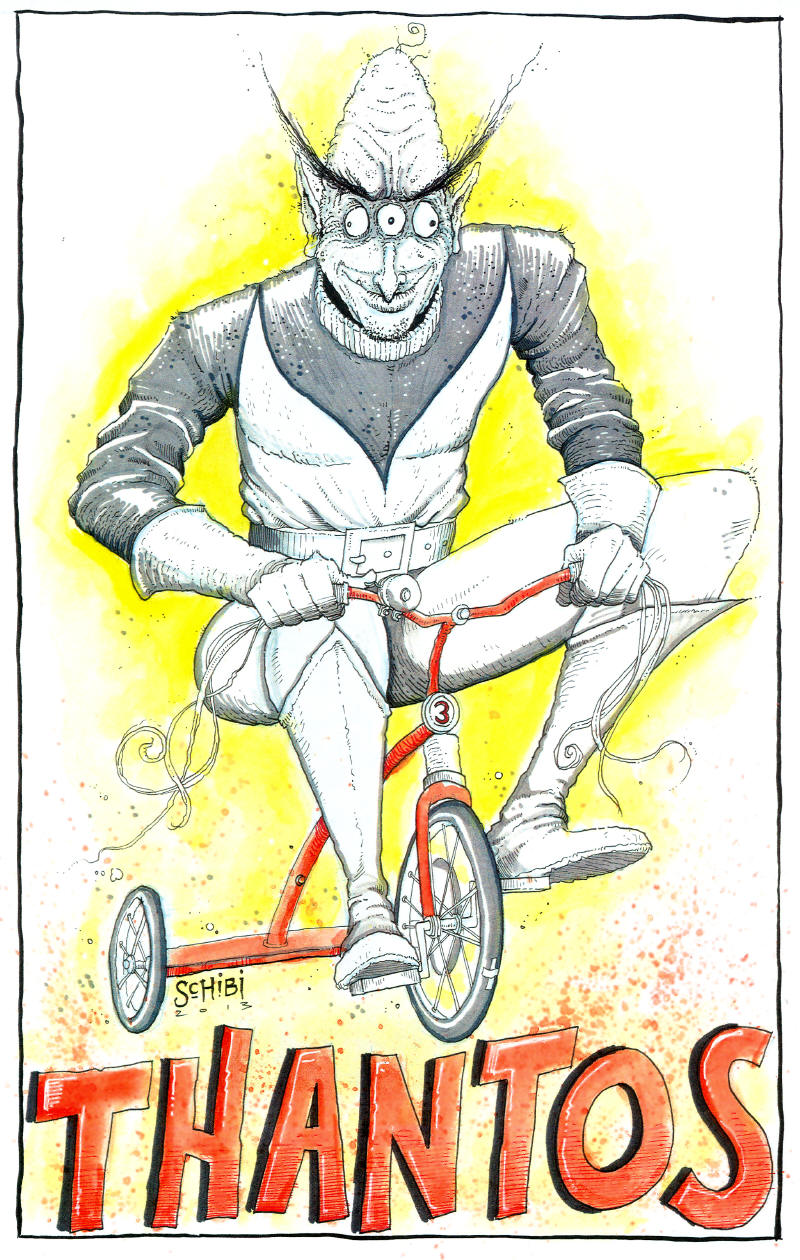 Following the winter hiatus, I wanted to get back to the Awesomest Alien Atlas Art Anytime commissions I've collected with a strong, Zook-related restart. Thantos, the 3-In-1 Man is part of the Martian Manhunter and Zook's shared rogues gallery, as well as one of the most powerful and unique of that often conceptually anemic lot. After probably decades without any artists giving the character a thought, my best friend "Illegal Machine" did a classic style doodle for me, then decided to really work him over with a New 52 redesign that raised the bar on my expectations for a legit, pay-for-play commission. I figured Cody Schibi was up to the challenge after his fantastic interpretations of Mr. Moth, The Mercurian Renegade, and Diabolu the Wizard (with his Idol-Head). Perhaps I was still too in love with the Ill Mac's alterations, but my initial reaction to Schibi's whimsical, surprisingly faithful rendering of Thantos was muted. "Oh, a tricycle. I get it." But the truth is that I didn't, and I had to work it out in my brain. Both my best friends and my girlfriend not only loved it immediately, but if I recall correctly, the Ill Mac himself declared it Schibi's best piece for me yet. Was I being "that guy?" The nerdy fanboy who couldn't let go of his rigid mental image of a character to appreciate fine art? Was I seriously trying to rationalize the nature of the piece with dumb thoughts like "maybe the bike was one of the artifacts Thantos needed to collect to permanently cross over to our dimension? Maybe the tryc represents his innocent desire to escape?" 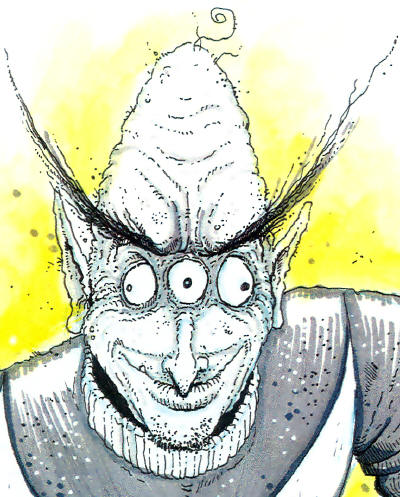 What finally got me to stop worrying and appreciate this as the bomb was my recollection of the Thanos-Copter. For those who don't know, Thanos is the "Mad God Titan," an extraordinarily powerful cosmic demigod whose courtship of the literal embodiment of death has led to the murder of billions, including his own mother. Back in the 1970s, there was a tie-in comic to a segment of the PBS children's program The Electrical Company called Spidey Super-Stories that featured Spider-Man in very simple stories for early readers. For some reason, the creators of one issue decided to use Thanos of all characters in a story, and to treat him as a low level gimmick villain who tries to disrupt the Women's Liberation Movement while flying his own self-branded helicopter in an adventure co-starring The Cat involving lots of forced dog puns. I could have probably broken that synopsis up, but I felt it needed a breathless run-on sentence to capture the insanity of a tale that ends with NYPD escorting a handcuffed Thanos to a squad car. This is the guy who turned up in the stinger at the end of Marvel's The Avengers, so of course this bit of Bronze Age kids' ephemera is now a staple of "Things You Didn't Know" lists, and ThanosCopter is even the pen name of a contributor at The Outhouse. What we have here is Thantos-Cycle. In an alternate universe, Martian Manhunter got his own Hostess ad and Thantos rode it in pursuit of the real fruit filling and flaky goodness of a Fruit Pie, only to be cast into another dimension with a Twinkee as his consolation prize. Now I get it, and thanks to Cody Schibi, it's a big delight! Visit his blog Drawing A Blank, and don't overlook my other best friend's Thanos commission for a nice thematic closing!
Posted by Diabolu Frank at 12:00 AM