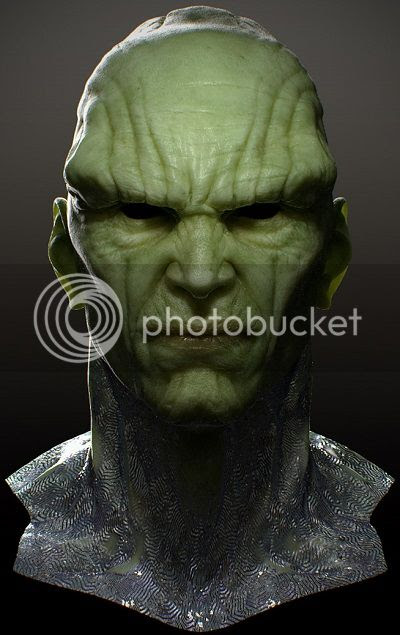 "I don't know why, but the last two pieces have all been DC-characters. The last one I did was a 40s alternate version of The Flash Noir. I did acutally start on another version of Martian Manhunter a couple of years ago, but after revisiting it I wanted to start from scratch.

So this is a render from Vray. I've been using Mental Ray for quite som time now but I thought I'd move over to Vray, which I feel I like better and better each time. So I'm still learning the ropes and testing the different shaders and so far it's pretty straight forward which is nice. I'm used to the mix8layer-shader in MR so it's nice to try out Vray's BlendShader and mixing it up! So this is just a test render so far. Not sure I'll be keeping any of it in the end."

Brändström continued this "One Year Later" inspired modeling to a full (uncolored) figure, which you can see here, or progress to his site Badrobots for more of his work.
Posted by Diabolu Frank at 5:37 AM

Reminds me a lot of the Greg Horn Skrull paintings from Secret Invasion a couple years ago.

Man I'm seriously digging the banner. The render is nice as well. I'll be checking back for more of his work.

C.D., Secret Invasion was six years ago. Yes, you've gotten three times older than you thought you had. Senility is just a few linewide crossovers and heaping sobs away.

OA1, the current Diabolu Idol-Head banner was one of the most slapdash, labor-relaxed I've ever done. So of course, by happy accident and minimal thought/effort, even I've been surprised by how effective it turned out to be.

Anyway, I, too, like the simplicity of the new banner. Nice work!