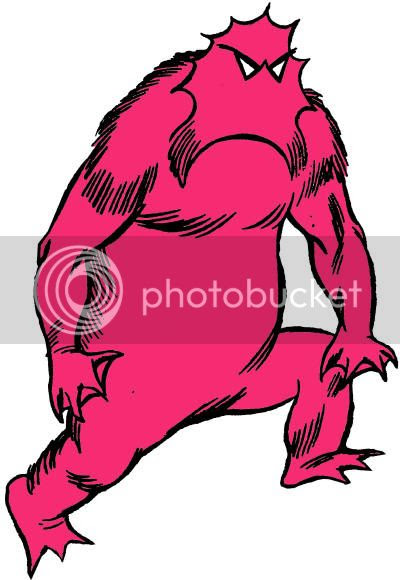 History:
When the idol-head released the mighty Aroo, it set in motion a prophesy from The Book of Diabolu that "The Doom Shadow will follow..." A giant glowing spotted egg was secreted in a cave in the United States, origin unrevealed, and was preparing to hatch. Aroo protected the egg from flooding after a dam burst, and safeguarded it from the investigators Martian Manhunter and Zook until it finally cracked open. Aroo turned transparent and faded away, his final fate unrevealed, while the Chulko began its rampage.

The Chulko was a large anthropomorphic being of unclear composition, although it appeared to combine mammalian fur with reptilian webbing/fins. It caused damage to the region of farmland near where it hatched, and showed neither a regard for life nor a clear, mindful purpose. The Chulko managed to temporarily strip J'onn J'onzz of his powers and even basic locomotion with its eyebeams before being destroyed by Zook.

Powers & Weapons:
The Chulko is best remembered for its "Doom Shadow." Essentially, anything that fell under the shadow of the Chulko became petrified. The Chulko could also fire paralyzing rays from its "evil eyes," which effected everything from machinery to Martians. The Chulko was fatally vulnerable to water, which caused it to fade away.

Created by Joe Certa
Posted by Diabolu Frank at 4:56 AM

Okay- he is my favorite so far! -Great design. Does a trade of this story exist?

Everything ever printed by DC Comics about the Idol-Head of Diabolu has been collected in Showcase Presents: Martian Manhunter Vol. 2, which is still readily available from all fine booksellers (and quite cheap used.) However, none of these stories have ever been reprinted in full color, which is still reserved for (relatively inexpensive) back issues.

So it's only collected in B&W? What a bummer!!! -I take it you have tracked down all (or most of) the back-issues then?

Most of the issues of House of Mystery featuring J'onn J'onzz have passed through my hands, but I sold the majority of the Idol-Head related stories when I had my shop. It matters to the character's history, but they weren't really my bag. I still have the Vulture and Professor Arnold Hugo stories, though. As for the Detective Comics run, I rely on gifted scans for color reference.