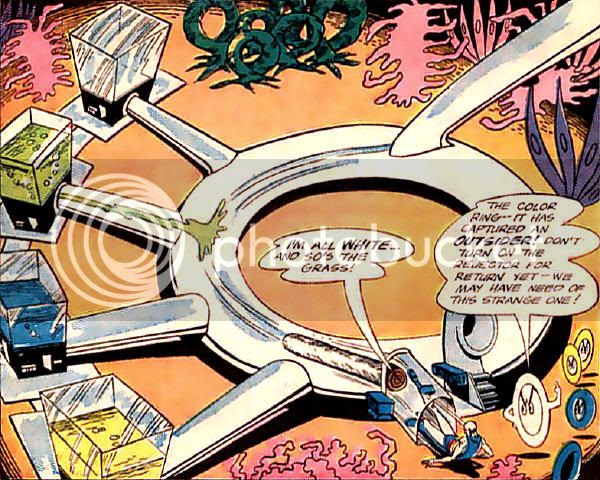 History:
The people of the other-dimensional Disc World appeared as mildly anthropomorphised circles roughly the height of adult humans. They had large, free-floating cartoon eyes and brows, as well as approximations of arms and hands as needed. The Disc World people appeared to hover a foot above the ground as part of their natural locomotion. The representatives of the world seen to date have been aggressive, with soldiers poised for invasion. According to the legends of this colorless people, one day they would acquire access to color which would empower them to exist and thrive on other worlds. 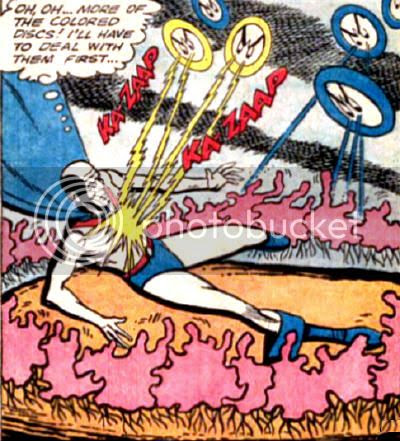 "The Great Color-Ring Spirit," eventually appeared on Disc World, not coincidentally at the same time the Diabolu Head opened for the seventh time on modern Earth. This Color-Ring Spirit created a warp between Earth and the Disc World, then began capturing flatly colored objects from the city of Bedford. Through a curious contraption, the Disc people extracted a specific color from said object, which appeared to take on a liquid form. This liquid could then be absorbed by the Disc World's citizens, which would grant them powers. Yellow rings could create energy bolts that destroyed targets with a blinding flash. Blue rings could "bring inanimate objects to life!" It seemed that either the red or green ring could manifest figments of the imagination as a thoroughly convincing, overpowering entity in the mind of a given victim. In the case of the Manhunter, this power was demonstrated by his fantasy of battling a two-headed octopus type creature strong enough to contain even his Martian muscles. The illusion faded when the Spirit no longer required the distraction. It is not known what the unrelated ring (whether red or green) could do. All colored rings on the Disc World and beyond appeared to be able to fly. 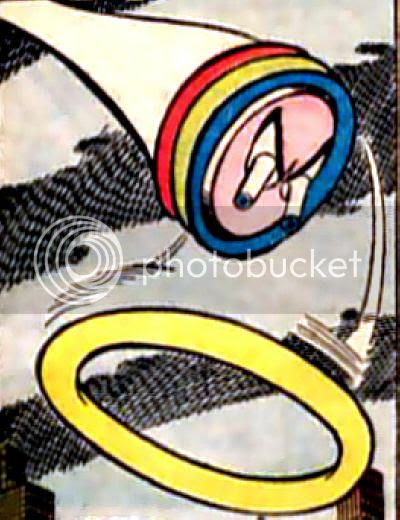 The Color-Ring Creature was spawned under a full moon, but began its thefts in downtown Bedford City at dawn, attracting the swift attention of the Martian Manhunter and Zook. "The Great Color-Ring Spirit" was a pink circle as opposed to a ring, and its eyes rested on stalks. It soon merged with four initially colorless rings which acquired chroma and powers through the theft of earthen objects. An individual ring would separate from the Color-Ring Creature, commit a theft by absorbing an object, transporting it to Disc World where it was stripped of a color, then returned to Earth via a rejector device. This process would repeat until each ring was sufficiently filled with color to empower the Disc Soldiers to invade. However, the Martian Manhunter and Zook allowed themselves to be captured, sabotaged the machinery on the Disc World, and returned home before the Color-Ring Creature vanished from the Earth.

Created by Jack Miller & Joe Certa
Posted by Diabolu Frank at 5:09 AM

I wonder if The Disc World is where The Weird was actually from. Sounds about right. Zarolatts, and Macrolatts, and The Great Color-Ring Spirit, OH MY!

Oh god-- not The Weird. Attempting to read that series was the first major breakdown of my childhood devotion to Jim Starlin.

Hahaha! Reintroduced trauma! That's what you get for showing me that mildly anthropomorphized circles were a thing that existed.
...I actually like The Weird. I like Starlin's off-the-wall shit. -Thought Gilgamesh II was really good as well. But to be honest- I've never NOT liked anything I've read by Jim Starlin.

Ahhhhh I had completely forgotten about these!!

Okay, the plot of this story alone should be the raison d'etre for a full-color Martian Manunter Archives.