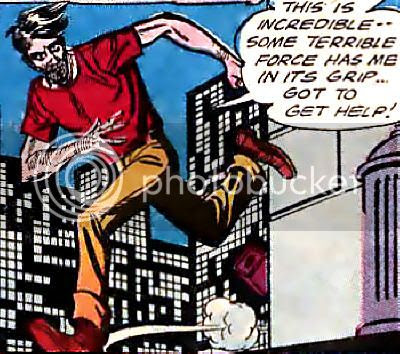 While taking in a run along an unidentified city's shoreline, beachcomber “Driftwood” Dagan saw the Diabolu Head bobbing in the water. As soon as Dagan picked it up, he was struck by energy released from the opening lid of the idol-head. Dagan turned into a human-sized mole, dug up a child's buried treasure, then reverted to human form. Panicked, Dagan ran into the city for help. Again, he transformed into a furry mammal, this time with a steel screw power drill for a nose. After it bored a "time scroll" capsule out of the corner stone of a building, the restored Dagan was arrested by police. En route to a mental hospital, the frustrated and angry Dagan turned into a large condor-like creature whose feathers burst into flame when they separated from its body. The bird escaped, recovered a bag of stolen loot, and evaded the pursuit of the Manhunter from Mars. 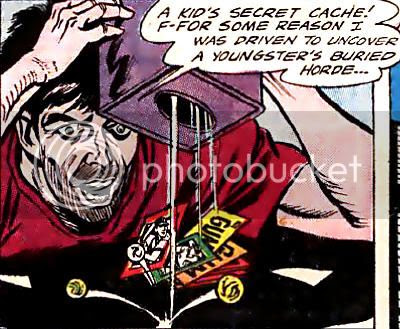 Consulting The Book of Diabolu Legends, the Manhunter determined that this man-thing that unearthed secrets had been created to find the Witch Doctor's Tomahawk, but some unknown force had altered Dagan's programmed imperative so that he instead dug out any treasure that crossed his path. This included a secret underground government depository, which Dagan was compelled to raid as a winged caterpillar. An encounter with Zook nearly caused Dagan to drop gold bullion bars on the heads of defensive National Guardsman, if not for the intervention of the Alien Atlas.

Dagan made his way to the mountain area north of the city, where he turned into a giant weasel and invaded the cave hideaway of Martian Manhunter and Zook. Dagan briefly resumed human form, then transformed into a worm to locate a facsimile of the tomahawk. The Manhunter from Mars had planted it with the intention of halting Dagan's changes for good. The plot appeared to be effective, though Dagan was not seen again for confirmation. It is unknown whether Dagan was held responsible for his unintended crimes.

Quote: "Please... you must listen to me... Some terrible force turned me into a creature and made me dig this out!"

Created by Jack Miller & Joe Certa
Posted by Diabolu Frank at 4:50 AM