The Orchestra of Doom 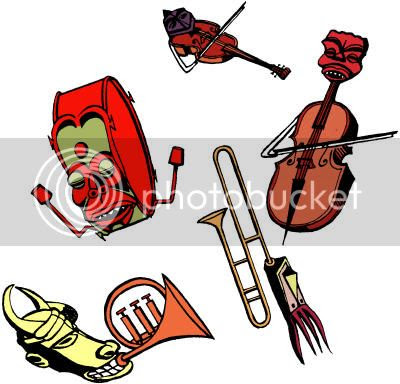 Also Known As: "The Musical Creatures"
Occupation: Instruments of chaos
Base of Operations: U.S.A.
First Appearance: House of Mystery #147 (December, 1964)

History:
From the cliff side where Aroo had left the idol-head, a sixth full moon meant Diabolu would spawn another menace into the modern world. Diabolical flying musical instruments made their way to a city square after following their maestro's order to tune themselves in preparation to play "The Arms of Morpheus." The weird melody caused bystanders within earshot to immediately fall asleep. The heroic Manhunter from Mars and his dimensional friend Zook rescued the humans from the calamities that followed their sudden slumber. Although the aliens were not affected by the eerie music, the orchestra of music creatures were able to create a supernatural sonic barrier against aerial pursuit by the Martian Marvel. The instruments then faded from view. 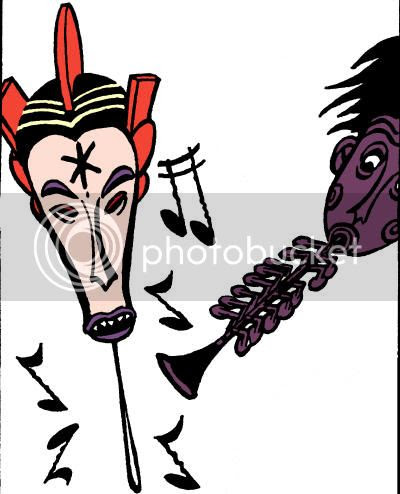 Hours later, the Orchestra of Evil rematerialized south of the city, playing a new melody that caused citizens fits of hysterical laughter. Local hoods stopped up their ears and attempted to use the mayhem as a cover for robbery, but were captured by Martian Manhunter and Zook. The Doom Band again faded out, but upon their reappearance, split up to stage "concerts" in three separate parts of town. The purple flute creature cracked the tower of a northern building before fleeing Zook. A duet of musical creature strings (cello & violin) created "sound rails" that tracked a train up into the sky, only to stop the music abruptly. J'onn J'onzz rescued the train, but was too late to address the fading strings.

A quartet of musical creatures at the city park; including the maestro, the drum, the French horn, and the cello; caused a violent riot. This time, Zook fell under their influence, but was released when the Orchestra of Doom were driven off by a rival human band in the park. The following day, the bizarre orchestra hovered over the harbor district at full strength, causing boats to crash into one another. The Manhunter from Mars soon arrived to function as a one man band. While the musical creatures had been exposed to a variety of music during their rampage, their shrinking from the park indicated their vulnerability to the song "Last Rose of Summer." J'onn J'onzz played out the musical creatures with the tune, trapping and disintegrating the lot.

Quote: The Green One again! He has learned our weakness-- the music... we cannot stand it!"

Created by Jack Miller & Joe Certa
Posted by Diabolu Frank at 5:51 AM

That trombone is the freakiest! Jesus- fuckin' nightmare fuel... I'm imagining that mouthpiece-end latching around your head- like a facehugger does- forcing you to play it until your lungs collapse...

I was going to say this was the stuff of nightmares until the King beat me to it. Whatever that thing is to the left of the clarinet is what I find most terrifying. (I mean, I can't even identify that thing...that is unlike any instrument I've ever seen.)

House of Mystery is just one fun-filled wild and zany acid trip. Sometimes you lose sight of how fanciful these creatures are...until you see them here, in color.

The Orchestra of Doom was part of the creative nadir of the original strip's run. While the story was weak, Joe Certa's designs were definitely inspired. I originally intended to just post second hand jpeg scans, but the intricacy would have been lost, so I manned up for my own scanning/recoloring. These things looked so much better than they read. Not unlike watching Monkeybone, come to think of it.

I personally found the little seen flute the most disturbing. Liss, your "favorite" was the maestro (note wand.)

I was wondering what that one was too! -The Maestro, eh? *insert Seinfeld quote here*
Also, good job on recoloring all these- that's awesome. It would be less intriguing in black & white... These menaces, and their designs, just pop more in color.
I 100% understand and agree with what you said about Monkeybone.

You've been coloring these Frank? I've been wondering where you were finding such clean scans--nice job!

I scan the black and white Showcase Presents pages, digitally "bleach" them for clarity and to receive color, take color samples from scans of the original comics for authenticity, and then do simple color fills. It's an overly complicated process for a simple, basic result. I'm just glad they don't entirely suck.