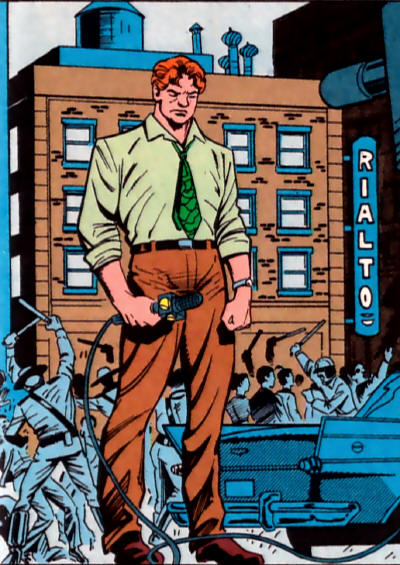 History:
Spencer Lee was raised in Wilmington, Alabama during the early 20th century, but moved to Denver, Colorado for a couple of years to pursue a career as a newspaperman. It was on this beat that he met police detective John Jones, who said of Lee, "He always seemed a little out of place. A real character, southern through and through... Used to hang around the police station, badgering me for story leads," and was "a persuasive son of a gun" Lee broke one story that "pounded city hall" over a development scandal, which ushered in a new administration more cooperative with the police department.

Lee came to believe that papers were going to die out, and eventually returned to his home town for the opportunity to move into television news with WWIL channel 7. A smoker, Lee suffered a minor heart attack in the early Spring of 1963, attracting the attention of his old friend Jones. During a convalescent visit, news broke that an African-American church had caught fire, terribly burning a child named Mary Lou Wilson. Lee convinced Jones to investigate the matter until Lee was discharged from the hospital.

When Jones turned up evidence of a cover-up by local and federal authorities, Lee brushed-off these findings. Lee favored his unnamed "sources," who asserted "The church fire was started by the colored community. Maybe an outside agitator was involved. They want to stir up the racial situation around here. Garner some sympathy and attention..." Lee was thrilled when his tiny station was scheduled to go national when "militant" blacks began matching through Wilmington. Jones asserted that they were peaceful demonstrators, but Lee dismissed his concerns. "Just do me a favor and don't tell me how to do my job." Lee was set to distort the conflict that followed under the brutal hand of local police until he was confronted by an angry John Jones, who manhandled and guilted the reporter. Ashamed, Lee finally spoke the truth for a national audience.