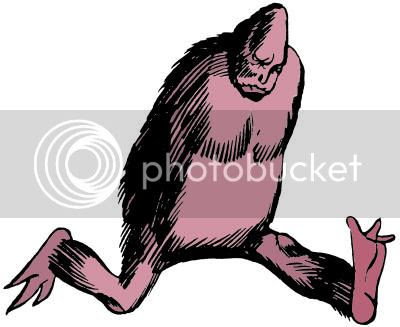 History:
In a junk yard heap, at the full moon, a second menace was released by the Idol-Head of Diabolu following its activation by Vince Durskin. A strange pod wafted on the wind and settled into the rich soil of a farm. At dawn, this approximately twenty foot tall "seed creature" erupted from the grounds near a farmhouse and began lumbering about. Local authorities were alerted, and media carried the news to a radio in the sealed mountain hideaway of the Manhunter from Mars and his powerful pal Zook. Quoting The Book of Diabolu Legends, J'onn J'onzz noted "Man's fear will unleash its golden touch, and when its dark mission is completed, it will leave greater evil behind in its place." 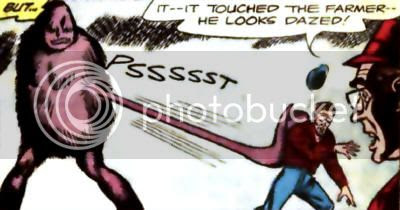 Flying to the farmhouse, the Martian Manhunter was dismayed to find a local man had fired a rifle at the "harmless" creature, activating its defenses. Where the creature had previously displayed no visible upper extremities, a single tentacle-type appendage stretched out to touch the farmer. Initially dazed, the farmer grew to giant size and began mindlessly attacking onlookers, damaging his own farm. While the Alien Atlas knocked out the farmer, Zook tried to tangle with the creature, but was touched by the tentacle. Zook grew in size and aggression, his body radiating such heat as to ignite nearby trees. While the Manhunter dealt with his maddened sidekick, the creature shuffled off, continuing its "dark mission." The creature fired its appendage a final time under a rock, then began to shrink into nothingness. "Great suns! It-- it expended the last of its energy on-- on a microscopic figure that's started to grow! It's completed its mission." The Giant-Maker had restored the sorcerer Malador, who began his own rampage until being stopped by the Manhunter and Zook.

"It- it touched the farmer. He looks dazed!" I can't stop laughing at that. -Guy reminds me of Gossamer. There's even a martian connection! Ha!
Zook creeps me right the fuck out, though.

Hi, Frank! I am enjoying this look at the foes generated by the Idol Head. By the way, there is a preview of Justice League #12 that includes a kind of steampubk page of Stargirl and the Martian Manhunter -- http://www.comicbookresources.com/?page=preview&id=20183

I didn't catch that, but you're right, the Bad Touch Giant is the missing link to Marvin.