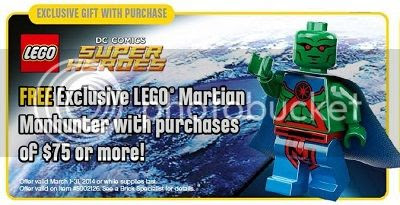 I was off work today, but I agreed to a couple of early bird days starting tomorrow. After my usual exceedingly long reply to the latest Who's Who Podcast, I was all like "blogging is for losers" and caught up with True Detective instead (it finally gets moving with episode three.) I knew I needed to knock something of little depth out as quickly as possible, but still bothered to check my neglected "official" email. Lo and behold, one of our readers had sent me something that fit my needs. I don't know if Alexi is a public figure (seems likely per Google, but still) so I won't use his full name, but he alerted me to the fact that the Alien Atlas was finally going to get the Lego Minifig treatment. Folks seem excited to finally complete the "Magnificent Seven" JLA in Lego form, though I hasten to note that this is the New 52 version, so you'll still have to wait for Cyborg.

Before they came out with the large Avengers movie Hulk, they released him as a Minifig with a more '70stastic look, so I'm hopeful we'll get a Silver Age/Classic Manhunter from Mars at some point in the future. I do like the New 52 design though, and it translated very well to brick. I am a tad perturbed that my Lego obsessed girlfriend managed to miss this, but since she's the one who'll be spending the $75+ to get the "free" toy within the month of March 2014, I can't exactly hold a grudge. Also, I put together a Lego B'rett with her spare parts a few years ago, which I really ought to photograph and digitally customize for the blog. Or not. We'll see.

Read more about the Minifig here!
Posted by Diabolu Frank at 10:15 PM

Too bad you have to spend an arm and a leg to get him...! (Remember back in the day when Legos were like...somewhat affordable?) But good to know that Lego is doing this.

I saw Lego Batman 2 at Gamestop the other day and almost bought it, remembering that Martian Manhunter is buried in it somewhere. Someday.

Don't worry. In a year they'll either be in a playset or converted into an affordable magnet/keychain/etc.