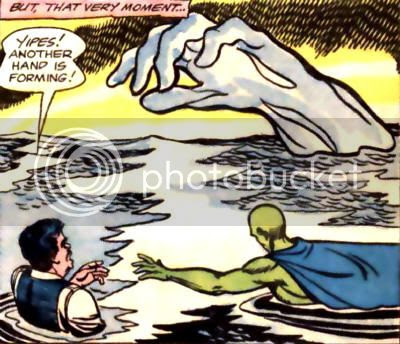 History:
In the third recorded instance of the Idol-Head of Diabolu unleashing evil in the modern era, a hole opened in the sky that forcibly transported people to the weird world of Gilgana. One such innocent found himself floating in a body of water from which a giant hand formed. A rescuing Manhunter from Mars dived to the rescue, and sand on his body from Gilgana caused an explosive reaction when it came into contact with the water. A new hand soon formed, but the Alien Atlas spirited the man away to land, then formulated a plan to use his discovery against Gilgana.

Wait- wouldn't this be instance #4?

No, because the Idol-Head unleashed the vacuum portal to Gilgana, not the individual threats found on that world.

Oh, okay... I've never read these- it's just that the "Horn Firing Creature of Gilgana" entry also said: "In the third recorded instance of the Idol-Head of Diabolu unleashing..." so it seemed like a repeat.

Oh no, you're right. I totally self-swiped by using one entry as a prototype for the other. It's just that I'm trying to only number the times the idol-head opens, as opposed to the number of things that come out fighting. Most months, the Diabolu either released more than one creature at once, or created one thing which generated numerous additional headaches. All those contingent action could get to be difficult to follow, so I'm just sticking with the one qualifier.