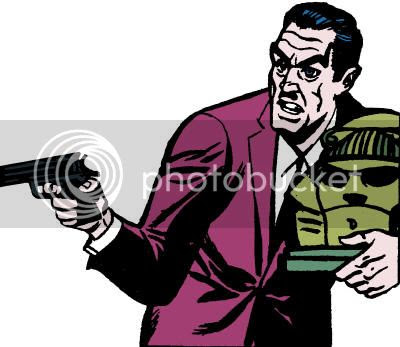 History:
Little is known about the history of Vince Durskin before he stumbled upon the secret key of the wizard Diabolu and knowledge of its purpose. Durskin then broke into the home of John R. Collins to steal the Diabolu Idol-Head, the receptacle to be unlocked by the key, in hopes of finding rare jewels within. Durskin was confronted by Collins, who he held off at gunpoint before escaping with the idol-head. At a shack Durskin was renting adjoining a canal on the outskirts of Middletown, the thief unlocked the idol-head, and was immediately struck by a supernatural flash. Energy began to flow out of Durskin's eyes to destroy anything that befell his gaze, aside from a convenient pair of sunglasses Durskin found could contain his new powers. A voracious cloud-like entity was also released from the idol-head before it closed, demolishing the shack and progressing to wreck havoc in the region.

Durskin fled from the force he had unleashed back to the metropolitan area of Middletown. Though initially despairing his transformation, Durskin soon realized an opportunity to use his eye beams to rob an armored car. The theft was interrupted by the arrival of the local super-hero Martian Manhunter. While the Alien Atlas shrugged off the strike of Durskin's eye beams, Durskin was able to stymie the Manhunter by imperiling onlookers until he could slip away.

Later, Durskin was tracked by police to a flat on Dey Street, but before he could be apprehended, officers were diverted to deal with the energy cloud. The Martian Manhunter had deduced that Durskin's new powers might be the key to stopping the cloud, and successfully applied the theory after apprehending Durskin. However, the Manhunter was forced to permanently abandon his secret identity as John Jones in the process. Durskin's powers vanished with the cloud, and he was turned over to the police.

Powers & Weapons:
Vince Durskin's destructive eye beams appeared to bludgeon objects with great concussive force, as opposed to outright disintegrating them, but the process was not sufficiently explicit for certainty.

Distinguishing Features:
Vince Durskin was described as having "a long scar down his left cheek" and having a "Hitler-type mustache."

Created by Jack Miller & Joe Certa
Posted by Diabolu Frank at 6:56 AM

I enjoyed the look at Zook and I am enjoying the features on the Idol Head.

Also, there is a Martian Sighting for you in Stormwatch #28 -- http://www.comicbookresources.com/?page=preview&id=20158

Thanks again for the info, Will! You're the Idol-Head's media czar! I'll probably wait that one out in the quarter bins, though.