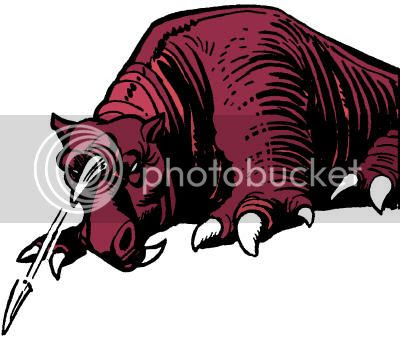 History:
In the third recorded instance of the Idol-Head of Diabolu unleashing monsters in the modern era, a hole opened in the sky that forcibly transported people to the weird world of Gilgana. One such innocent found himself pinned down in the sand by a large rhinoceros-type creature roughly the size of an elephant or two. The creature had a horn approximately a foot long protruding from its forehead that it could fire like a rocket at least a hundred feet, then immediately regrow and fire another. While likely lethal to humans, the bony projectiles broke into pieces against the chest of a rescuing Manhunter from Mars.

These are so interesting... This one reminds me of Tundro from The Herculoids.

Right? Not so much in looks, but in practice...