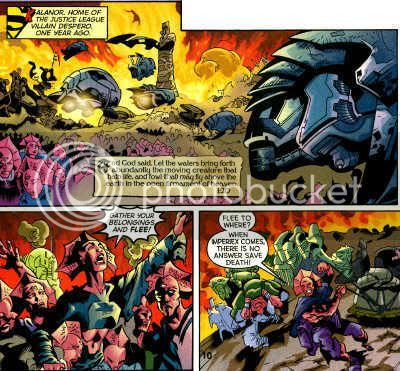 As part of the Superman Family’s never-ending battle to prove that the Man of Tomorrow is the most powerful and important being in creation this side of God Almighty, the Last Son of Krypton faced not just a transparent Galactus analogue, but an army of them. Instead of devouring one world at a time though, the forces of Imperiex made a years-long push to spread destruction and ultimate entropy through the universe. That’s really all the set-up you need for our comparatively brief review of Our Worlds At War, considering the 500+ page trade paperback blew off collecting numerous non-Superman Our Worlds At War specials and tie-ins that would have bumped the page count closer to 1,000.

Among the worlds and peoples destroyed by the OWAW onslaught were the citizens and planet of Kalanor, birthplace of Despero. A probable victim, after hearing one of many cries to flee, answered, "Flee to where? When Imperiex comes, there is no answer save death!" Next on the list for stakes-raising planets of Asparagus People* were Almerac and the Gordanian homeworld Karna (at least the second dispossession of surviving Thanagarians, to boot.) Whole worlds that joined in the defense against Imperiex included Daxam, Apokolips and Rann. As one might expect, Darkseid, his son Grayven, Maxima, Adam Strange and Starfire spearheaded the defensive, along with the unfortunately named Massacre and the unfortunately conceived Mongal.

*Since this is a DC blog, I’ll note this is a reference to the Dark Phoenix Sage from Uncanny X-Men. Marvel Zombies should not only get the joke, but assert that their proper name was the D’Bari, which was also a franchised Martian salad bar Pre-Crisis.
Posted by Diabolu Frank at 7:00 PM