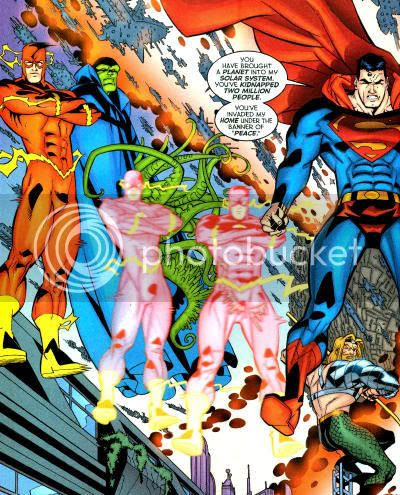 In order to protect the world on which he reigned, Darkseid made a trip to our solar system, and brought Apokolips itself along with him. Earth's heroes quickly rallied to meet the dark lord on Earth. Manhunter was of course among them, although the swirling tentacles that appeared from out of his cape seemed a bit more like a Durlan than a Martian. Then again, penciller Kano was prone to cartoonish extravagance.

Preceding his appearance, Darkseid was involved in the kidnapping of two million citizens from the city of Metropolis, and Superman demanded to know why. Once Supes revealed that he was aware of the threat of Imperiex, Darkseid felt no more needed to be said. When Superman pressed, an energy blast shot the Man of Steel across the city's skyline. Manhunter held back a League set on retaliation, overriding a first strike command by Aquaman. "No. He's trying to goad us into conflict. Superman is unharmed. Continue to hold--"

"I'd listen to the Martian if I were you", interrupted Lex Luthor, fresh from his presidential helicopter. Luthor was well aware of Darkseid's intentions, as he planned to coordinate the League forces alongside the grim tyrant. Gesturing to Manhunter, Lex requested the JLA's services... except for Superman, who was needed to stop an attack on Berlin by forces from the former U.S.S.R. nation Pokolistan. Superman was wary of leaving Darkseid to roam, but Martian Manhunter telepathically assured him, "If it makes the decision easier... I've locked the Watchtower teleporter on his Omega Beam signature. He so much as adjusts a contact lens, and he'll be on Neptune in five hundredths of a nanosecond." Superman took the trip...

Joe Kelly continued his reintroduction of a General Zod here, and though I thought he did a fairly good job, this iteration of the concept didn't last long.
Posted by Diabolu Frank at 7:45 PM

Thats does make J'onn look like he's about to star in an adult Japanese anime......ugh.

Its always a good day when I can make someone need steel wool for their brain.....:P