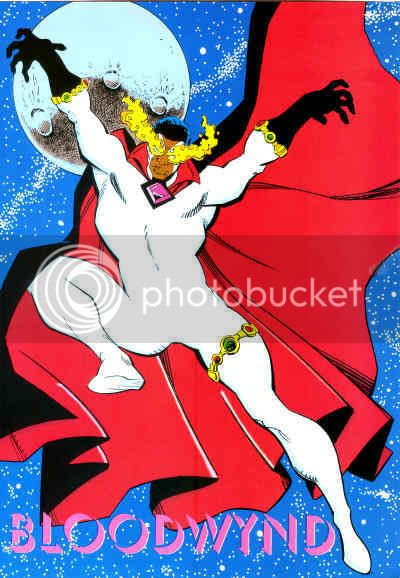 As I mentioned in my very late/next day Sunday posting of the 1993 Skybox DC Cosmic Teams Cards #43: Bloodwynd, I feel bad about unintentionally suspending Bloodwynd appearances during Black History Month. The card was meant to salve the wound, and I hope this goes one better. Featuring text by Mark Waid and art by Dan Jurgens and Rick Burchett, this Bloodwynd profile page can be enlarged, front and back, with the click of a mouse. That's a good thing, as the Loose-Leaf Edition of Who's Who sold far less than its predecessor, and this Update is downright scarce. I'd estimate there were only about 13,000 printed, many of which having been ripped apart and kept in 3-ring binders (like mine!) Who knew Bloodwynd had his own logo, even if the font is fairly generic? The information here is sparse, as is common with all things Bloodwynd, but I promise coverage will continue, including an inevitable biography! Lord knows confusion still surrounds the character, but I shall endeavor to make sense of it all! Do note that this is the second extraordinarily powerful African-American super-hero I've profiled in as many days to have vanished from DC Comics for half a decade and counting... 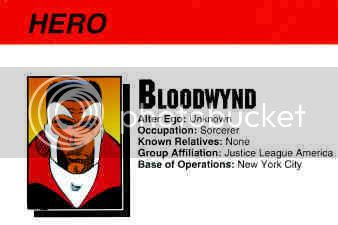 Posted by Diabolu Frank at 8:00 PM