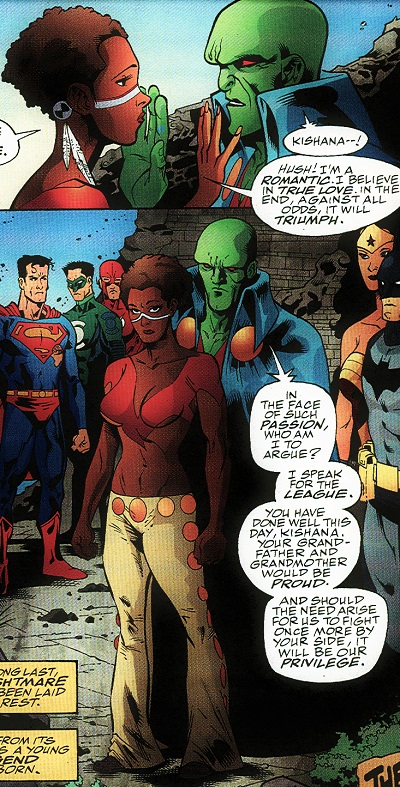 History:
Unbeknownst to Kishana Lewis, she was the descendant of the famed late 19th century African-American industrialist Abel Carmody and his Native American wife, herself the granddaughter of a shaman. Lewis was born in Los Angeles, far from the secluded Black Spirit Lake, where her ancestors fought to prevent an other-dimensional horror from escaping into our world. After their deaths, the Carmodys left behind an elaborate fortress. Dubbed "Carmody’s Folly," it came into the possession of an unnamed corporation, who maintained it to the present. In the meantime, Lewis served two tours in the U.S. Army and joined the Forest Service as a firefighter.

Lewis and three fellow Forest Service fire fighters were called out to the Spirit Lake Resort by manager William Hume as a preventative measure. Hume had expected a larger group, and remained insistent no flame should appear anywhere near the sprawling resort. Smoke-jumper crew boss Lewis cradled Hume's cheek in her palm, explaining the bad fire year had stretched local resources, but her men could handle the matter.

Within the forest, Lewis' three fellows were possessed by the ancient evil her ancestors had once contained. A subsequent confrontation caused powers Lewis had inherited to unconsciously manifest, igniting a patch of woods, and immolating the other smoke-jumpers. Kishana Lewis initially went into shock, before being met by the super-heroes the Flash and Green Lantern. Lewis attempted to warn the heroes about the immediate danger still posed by the monsters as they spirited her to safety, but the Leaguers were still surprised when the possessed smoke-jumpers rose up to continue their attacks. When the trio of former firefighters seemed poised to overwhelm the super-heroes, Lewis caused them to spontaneously combust, again without fully understanding her role in the action.

The Justice League of America arrived to take Kishana Lewis back to the resort for care, followed by questioning from the detective John Jones. Lewis was able to see through the disguise of the Manhunter from Mars, whom she allowed to enter her mind telepathically to read her memories. There, the Martian Manhunter found a flaming avatar of Lewis, seeming to possesses the knowledge of her ancestral birthright and duties the conscious mind of Kishana did not. This spirit form created a firewall against the horror, to temporarily protect the resort.

Later, J'Onn J'Onzz returned to the bedside and mental plane of Kishana Lewis. This time, Lewis was aware of what was happening, as she saw ancestral memories imprinted in her genome from 1877. It was here J'Onzz recognized Lewis' heritage, and she first began to feel her connection to the shaman. However, the contact was prematurely cut off by an assault on Carmody's Folly, which Lewis helped fend off with an assault rifle. Wonder Woman, who had been infected by part of the horror's influence, acknowledged the attack targeted Lewis, whose heritage the monsters hated and feared.

While Kishana Lewis hid in the catacombs under the fortress, the JLA desperately held back another offensive. When the Martian Manhunter was wounded by the monsters, his telepathic call to Lewis saw her arrive with a shotgun blasting. Lewis saved both J'Onzz and the Batman, before returning to safety to treat the Manhunter's wounds. As they turned septic, J'Onzz began to turn monstrous, and drew Lewis into his mind. The pair were attacked telepathically by a psychic ice storm, and J'Onzz remembered the same monsters had a presence on ancient Mars, where they were dubbed simply "Winter." Lewis again heard drums, both African and American Indian. She began to radiate heat on the astral plane, burning away the ice and curing J'Onn J'Onzz's infection. The pair kissed, then slept together.

Kishana Lewis and Martian Manhunter shared a dream about White Buffalo Woman and Thunderbird, strengthening Lewis' bond with and understanding of her heritage. J'Onzz professed his love for Lewis before leaving her side to defend against another monster attack. After much study, the Batman declared, "Carmody's collection references the demons of Black Spirit Lake from every Indian Nation in the Americas... back to the dawn of their history. And also a guardian-- a hero to stand against these forces of absolute darkness. The powers of the gods bonded to the soul and spirit of man... What we need is a way to unlock those abilities... transfer them from the astral plane to our reality."

Lewis, Batman and Plastic Man left Carmody's Folly and headed for Black Spirit Lake. Wonder Woman, now completely in the grip of monstrosity, fought a winning battle against the Dark Knight. Hiding in the woods from the evolving and increasingly large monsters, Lewis broke down, and was comforted by Plastic Man. "Manhunter believes in you, the Batman believes in you. 'Shana, Superman believes in you! They don't make that kind'a commitment easy, and they sure don't do it for show! Least you can do in return is believe in yourself!" Carrying on, the pair came upon an injured ivory elk. "The White Buffalo is a spirit totem. It imparts wisdom. The Great Elk is a warrior totem. It imparts the strength to use that wisdom. We'll make way better time with a ride!"

The elk carried the duo until it was speared by Wonder Woman and turned evil. Kishana Lewis' powers grew as she neared a tower in the middle of Black Spirit Lake, allowing her to fight off the possessed amazon. However, Plastic Man was defeated, and his malleable body used as a weapon against Lewis. The lynched Lewis held tight, despite Dark Diana seeing her as a flawed vessel for the hope of the world against her kind. However, inborn knowledge was manifesting, as was Lewis' strength, and especially her personal courage to wield both. The Martian Manhunter arrived, and Kishana compelled him to fire laser vision into her own eyes. This ignited heat emanation from Lewis than eclipsed that of the sun itself. The lake evaporated, the forest reduced to ash, and the monsters less than that. All infected persons present were healed, as were their injuries.

Kishana Lewis wished to continue her burgeoning romance with the Martian Manhunter, but her new powers made physical contact with J'Onzz impossible. Also, is appeared the demonic agent William Hume escaped the conflagration. Believing there were both more agents and gates to address, Lewis accepted that her war had just begun. 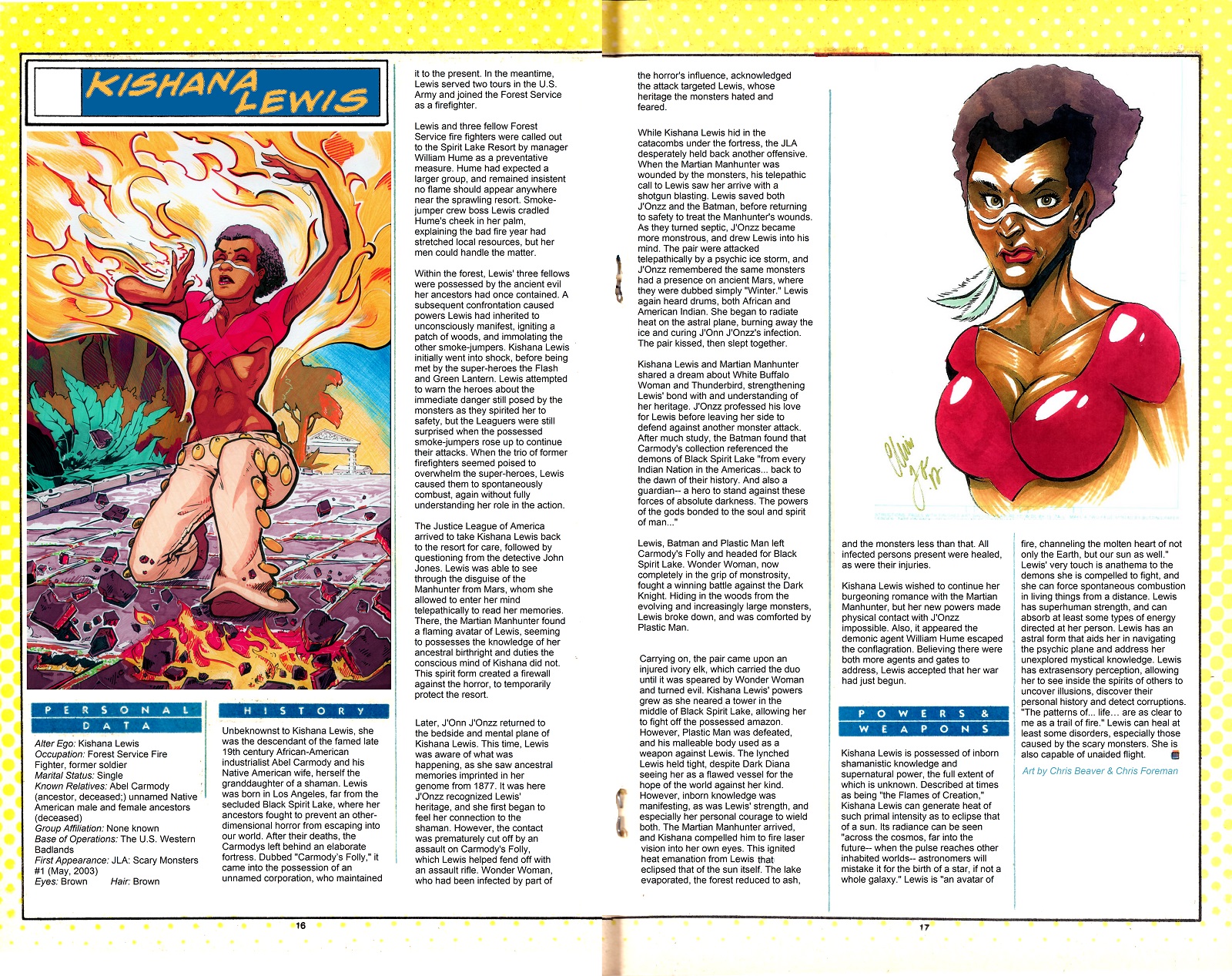 Height: Well Above Average (5'10"+)
Build: Athletic
Eyes: Brown
Hair: Brown
Strength Level: Superhuman. Punched a demonically-possessed Wonder Woman through several large trees.
Skills: Military and Fire Fighter training and experience.
Superhuman Powers: Kishana Lewis is possessed of inborn shamanistic knowledge and supernatural power, the full extent of which is unknown. Described at times as being "the Flames of Creation," Kishana Lewis can generate heat of such primal intensity as to eclipse that of a sun. Its radiance can be seen "across the cosmos, far into the future-- when the pulse reaches other inhabited worlds-- astronomers will mistake it for the birth of a star, if not a whole galaxy." Lewis is "an avatar of fire, channeling the molten heart of not only the Earth, but our sun as well." Lewis' very touch is anathema to the demons she is compelled to fight, and she can force spontaneous combustion in living things from a distance. Lewis has superhuman strength, and can absorb at least some types of energy directed at her person. Lewis has an astral form that aids her in navigating the psychic plane and address her unexplored mystical knowledge. Lewis has extrasensory perception, allowing her to see inside the spirits of others to uncover illusions, discover their personal history and detect corruptions. "The patterns of... life… are as clear to me as a trail of fire." Lewis can heal at least some disorders, especially those caused by the scary monsters. She is also capable of unaided flight.

Source of Powers: Shamanic heritage
Special Weaponry: Proficient in the use of most firearms.
Personality: Courageous and conscientious, though mildly sarcastic. Very accepting of differences in others.
First Appearance: JLA: Scary Monsters #1 (May, 2003)
Origin: Scary Monsters #5 (September, 2003)
Publisher: DC Comics
Status: Copyrighted.
Quote: "Gerry has a wife... and a baby he'll never see. Rudy's a painter. Simeon could dance. Ohhh how he danced. They deserved so much better."
Created by: Chris Claremont and Joshua Hood.