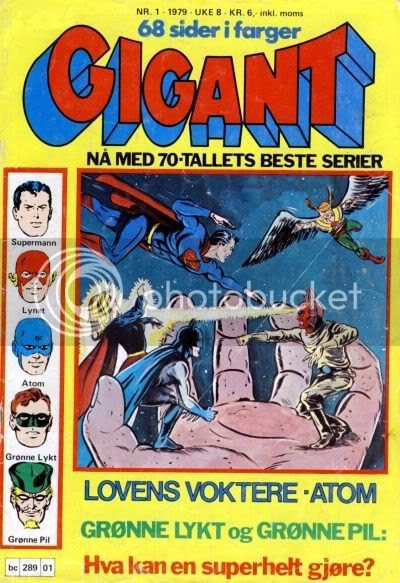 Gigant was a series of thick DC Comics reprint collections published several times a year and distributed throughout Europe. The choice of material was seemingly random, presumably whatever was seen as the most commercial prospects for various markets. Early on, their emphasis was on big guns like Superman and the JLofA, but by the end more obscure material reigned. This included Wein/Wrightson Swamp Thing, Vigilante, Camelot 3000, and most surprisingly, Jemm: Son of Saturn.

Most of the time, U.S. covers were just cropped or otherwise rejiggered for foreign release, but especially in the 1970s, new cover images were produced. Such is the case here, as Ernie Chan's cover for Justice League of America #134 was redrawn from a different perspective by an unknown artist. Presumably, the sellable figures on the original piece were too tiny, or the overall image too crowded. Elongated Man and Wonder Woman were excluded in the new image, while Superman and Batman's profiles were greatly expanded.

Both chapters of the third Despero story were reprinted, along with a Pasko/Grell Ray Palmer Atom back-up from Action Comics #442, the entirety of O'Neil/Adams' Green Lantern/Green Arrow #76, and a two page profile on Wonder Woman.

Oh, and in case you're curious, Despero translates as "Despero," so nothing gets lost in translation.
Posted by Diabolu Frank at 8:00 PM