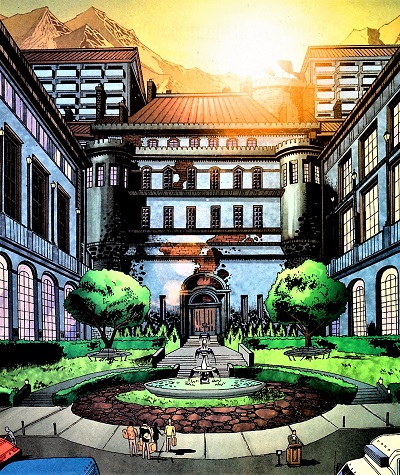 A sprawling fortress constructed near Black Spirit Lake in the Badlands under the direction of 19th Century African-American industrialist Abel Carmody. "Carmody’s Folly" was made of stone, and built to last. “While he built his empire, his wife supervised construction of their home. She died here, alone, within days of its completion. Carmody himself never set foot over the threshold… The entire house is constructed of granite, with walls averaging a meter thick… The lodge houses one of the finest collections of Plains Indians artifacts in the nation. And a library rivaling what you’d find at most top-rank universities. All relating to the occult... This is really the most extraordinary collection. Texts of magic representing every continent, culture and era of Earth's history... Trouble is, reading isn't enough. Shamanic lore requires a spiritual aptitude, much like the metagene that conveys superpowers, in those who seek enlightenment. You not only have to be born to the role, you also have to earn it by undertaking a series of ordeals.”

Further, the house contained, “catacombs that extend into the heart of the mountain. Fresh spring water. Medical supplies and food up the wazoo. Weapons. Generators and fuel for months. And not just electricity. There are more torches than I can count. Plus wood and coal galore.” It was noted, “That was a stipulation of Abel Carmody’s will. That his house remain intact and fully stocked, in perpetuity.” The resort hosts its own medical and security staff, as well.

At present, the nearest town is fifty miles from the valley. Although a lush forest oasis surrounded by a virtual desert, Black Spirit Lake was never settled by permanent inhabitants. No fish swim in its waters, and the green is barren of life, animal nor insect. The forest regenerates itself at a fantastic rate, so that even the most grievous damage to impact it could be regrown within a month. This process would appear to be a defense against the horror, as the wood is saturated with a resin that burns with the intensity of white phosphorous. In fact, the bowl-shaped valley could act as a natural blast furnace. The only exit from the valley is through Carmody’s Folly, and the monsters showed no ability to transverse the mountains surrounding it.
Posted by Diabolu Frank at 11:59 PM