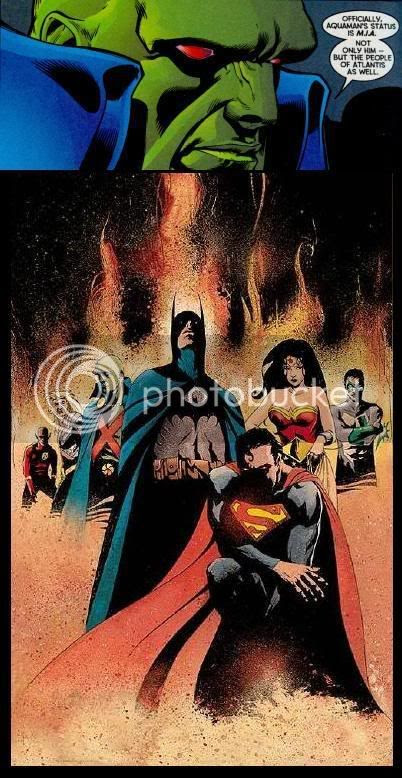 Superman attempted to press Batman into attending an upcoming ceremony. The Dark Knight was more concerned about the fate of Robin, lost in space with Young Justice, and refused. Wonder Woman came calling, and drug Superman off. "Kal. Bruce. Everyone mourns in their own way. The least we can do is respect that in each other." Batman later learned Robin had returned safely, because it’s all about the Bat-Family with that guy.

North Atlantis. Approximate former location of Atlantis. Dawn. Superman followed the Amazon there, where Atlantis had been transported to another dimension by Tempest to protect it from Imperiex's power. The ocean waters on either side of where Atlantis had set were held back as if by Charlton "Moses" Heston himself. The Leaguers set up a tall holographic representation of Aquaman, to serve as a beacon of warning for wayward seafarers approaching the chasm.

J’Onn J’Onzz seemed to smile proudly while looking up at this towering monument to his fallen friend. Manhunter noted, "Officially, Aquaman's status is M.I.A.," as the Leaguers spoke about Arthur as if he were one of the dead. For instance, Superman prepared the eulogy, "His sacrifice in the battle with Imperiex was so like him. It was always Atlantis first, himself second. The oceans. Sea life. They were... are his to protect and serve. A friend. A king. A hero."

Perhaps I'm speaking ill, but reading that, I wonder if Superman knew Aquaman at all. I love the character, but he’s never seemed comfortable in any role save wandering Samaritan.

Anyway, Diana returned to Manhunter's more hopeful mindset with, "What a remarkable man... made only more so by his ability to downplay how truly remarkable he is. Having been a princess, I am proud to call him king. And as a woman... I... I'll let him know what I think when I see him again."

The Titans also mourned Aquaman, but at the lighthouse home of his namesake, mostly because Phil Jimenez had to work Donna Troy in there somewhere.

Hippolyta's funeral was mentioned, but not shown. Instead, we saw Jay Garrick, Alan Scott, and Ted Grant reminiscing before Superman, Diana, and Sand called them away from the JSA meeting table.

Next, Kal-El and Diana checked in on Maxima's former armies, now commanded by (ugh) Mongal, who proved to be inhospitable. The pair also visited a monument to the (unmissed) Strange Visitor, a vigil attended only by her former boyfriend, who was no more pleasant to meet than Mongal. Made to feel guilty, Superman asked, "Are we supposed to be responsible for the world's pain? Where's the hope, Diana? Where's that little piece of good news that inspires us to continue on?"

Alternately, Clark Kent and Superman attended the funeral of Major Samuel Lane, along with Lois Lane and President Lex Luthor. The story ended with Superman and Lois at his parents' demolished Kansas home, themselves still missing and presumed dead. In tears, Supes asked, "We won the war, Lois, right...?" Shortly after, both of Clark's parents were revealed to be alive, because they were neither super-heroines nor little regarded supporting cast members.

It's ironic that a book titled "World's Finest," best known as a spotlight for Superman and the Dynamic Duo, had more for the JLA to say and do than in their own special. Jeph Loeb's script wasn't quite as horrible here, possibly thanks to the relief of it all being over, and an all-star art team. Mike Wieringo, Doug Mahnke, Phil Jimenez, Mark Buckingham, Bill Sienkiewicz, Yvel Guichet, Pascual Ferry, Todd Nauck, Duncan Rouleau, and Ed McGuinness all contributed.
Posted by Diabolu Frank at 7:00 PM