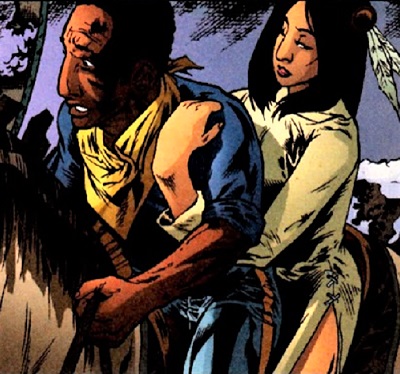 History:
In 1877, Abel Carmody was a “Buffalo Soldier” serving under Sergeant-Major Lincoln Freeman in the 6th Calvary “C” Troop. Disgusted by the orders of Colonel Daniel Rutledge to massacre a peaceful encampment of Plains Indians, Carmody and Freeman hid an elderly medicine man and his granddaughter, “same as my Pappy did runaways in slavery time.” The old man informed the black soldiers that their commander and fellow white soldiers who rode into a nearby valley to murder “surviving hostiles” were already dead. “There will be cold, and there will be snow… and horror will come for those who ride with him, to crack their bones and feast on the marrow of their souls. And then it will come for us! You must beat it back. You must keep the horror within the confines of this valley… or the world will end.”

Shortly thereafter, in the middle of summer, the snow fell, and the monsters came. “We fired our guns ‘til the barrels blazed too hot to hold. We never saw what wuz killin’ us. The snow wuz too heavy. They moved too fast. The only thing we learned for sure… wuz that iron made them hurt.” With only two men from the company left alive after the initial assault and one left standing, the medicine man explained further, “The portal that admits the horror to our world opens only for a time. When it closes, it must return to its own place. But each time, the door opens wider, and for longer. The horror means to claim our world for its own. It must be stopped.” The shaman was too old to survive a fight of the magnitude necessary to drive out the demons, and the Calvary had killed his son and intended successor. His granddaughter had the “blood for such a battle, but not the knowledge.” Sending Carmody and his granddaughter out of the mountains, the shaman explained, “I cannot destroy the dark trail, only block it for a time. The power I summon must be renewed, else the seals will be broken someday, forever! That, child, must be your task.” Freeman and the shaman stayed to face the horror, and perished in an explosion of flames.

Abel Carmody went on to become one of the great industrialists of the 19th century, and has been claimed to be the only African-American to whom that honor can be applied. “Born a slave, he died a millionaire… From the moment he made his fortune, he started building "Carmody’s Folly," a massive fortress completed around the times of Carmody and his wife's deaths.
Posted by Diabolu Frank at 11:59 PM