THE MARCH OF MONGUL 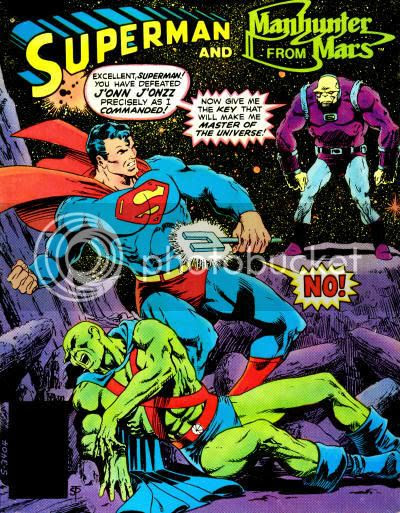 We've had themed events here at the Idol-Head of Diabolu, but this will be our first theme month, so I figure I have some explaining to do. Regulars will recall during week-long events like "The Flame of Py'tar: A Blog For Despero the Destroyer," little mention may be made of this blog's true star, J'Onn J'Onzz. However, there's no way I'd ever skimp on him for such an extended period, and you'll note the Manhunter from Mars remains prominent in our current banner. March will mark a return to coverage of J'Onn's years spent in exile from Earth, usually taking place on the adoptive world Mars II. I've been promising renewed coverage of these 1970s and early '80s stories of the Manhunter's time with his nomadic fellow Martian survivors since our second year started, and now I'll finally deliver. Expect long delayed story synopsis, factoids, and entries into the Vile Menagerie. Also, regular features like "Martian Solicitations" and reviews from the Justice League International years will remain. This is still your one stop blog for all things J'Onn J'Onzz.

However, we'll also devote a good deal of space to Mongul the Merciless, and you might be wondering why. I do love Starlin villains, with Mongul being no exception, but I also have a point to make. Mongul was introduced in an issue of DC Comics Presents from 1980 teaming the Manhunter from Mars with the Man of Steel. The story made it clear that Mongul and the Martian Manhunter had a past history, as our hero had foiled our villain's previous attempts to steal a device J'Onzz had sworn to protect at all costs. In order to finally get around the Manhunter, Mongul extorted the services of Superman to defeat the Martian. In the end though, J'Onn J'Onzz won Superman his freedom, but at the cost of his precious charge. Surely, the next issue would roll Superman and Martian Manhunter into the continuing fight against Mongul, as they were joined by other heroes? In the tradition of Marvel Team-Up & Two-In-One, the number of heroes would swell until finally gaining enough strength to defeat Mongul?

No. Martian Manhunter inexplicably vanishes from the story, while Superman runs to grab his cousin Supergirl for help. Their combined might negates the immediate threat of Mongul, but Superman still has to deal with the Spectre to save Supergirl in a third issue. In each issue, Martian Manhunter even gets pictured in flashback, just to torment me. What should have been a truly formidable ongoing Manhunter foe instead became the unofficial villain of DC Comics Presents. Superman would team with the Legion of Super-Heroes and the Steve Ditko version of Starman in two later encounters spanning 1981-82, but no Manhunter was in sight. In fact, for the most part, Martian Manhunter and Mongul haven't crossed paths since.

What's worse is that these strong appearances culminated in "For The Man Who Has Everything," the most famous Mongul story, and among the greatest Superman comics ever published. Superman, a character much in need of a proper rogues gallery, has a potential A-lister presented to him by Alan Moore and Dave Gibbons. Instead, Mongul is forgotten for several years, then "reimagined" Post-Crisis as a weakling who gets passed around to any super-hero who wants to fight him for an issue. Mongul went from beating Superman and the Legion combined (plus Supergirl, Green Lantern, Black Canary & Red Tornado) to a throwaway bad guy on a given month of The Flash.

My point here is to showcase the great Pre-Crisis conception of Mongul, and his important role in offering details as to what the Martian Manhunter was getting up in his years outside the spotlight. We'll analyze what was, discuss what is, ponder what could have been, and even gaze into the future. You see, Peter Tomasi edited the Martian Manhunter ongoing series, and wrote several stories about him, including the comic that sent him to the afterlife. Tomasi also wrote the origin of the Post-Crisis Mongul, and has used him on an almost monthly basis recently in Green Lantern Corps. Now, Mongul is part of the Sinestro Corps, while Martian Manhunter will become a Black Lantern in a rival Corps. Are we finally due a rematch?
Posted by Diabolu Frank at 7:00 PM

Labels: Martian Manhunter, Mongul, Superman, The Rock of the JLA