The Human Flame to "Run!" 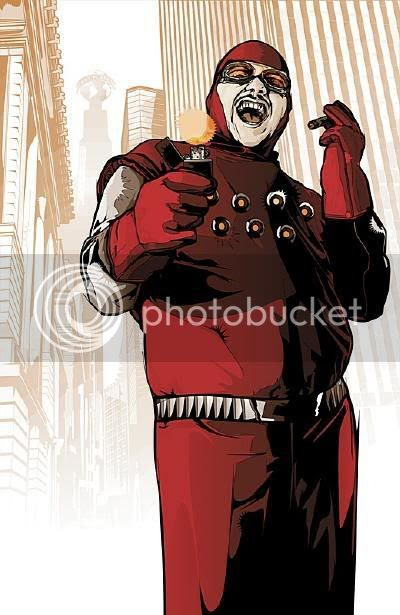 I've read most of the Martian Manhunter appearances produced since the early '6os, I run this blog, and even I don't care about the Human Flame. He appeared in one lousy story in 1959, was deservedly forgotten for nearly fifty years, and now he's got a Wikipedia page and co-credit for killing off a favorite super-hero of mine.

You know who doesn't have a Wikipedia page? Professor Arnold Hugo, who fought J'Onn J'Onzz in four of the best classic Martian Manhunter stories of all time, and got his start against Batman and Robin! You know who else doesn't have a Wikipedia page? Mr.V/Faceless, whose VULTURE criminal organization plagued J'Onn J'Onzz over eleven Silver Age episodes. I don't particularly care for MR. V either, as he was never especially effective, and the big reveal as to his true identity never made a lick of sense. Regardless, he's a more interesting Martian Manhunter villain than the Human Flame by a factor of ten. It goes without saying that Professor Arnold Hugo is better than Starbucks, right turns on a red, and the oeuvre of Lorenzo Lamas-- combined!!!

Unless Professor Arnold Hugo had a cameo on Oolong Island, he hasn't appeared in over forty years. Even if you count Mr. X from Amalgam Comics, Mr. V hasn't seen daylight in a dozen years. The Human Flame? Getting his own six issue limited series...

DiDio polled the crowd on Final Crisis (people seemed to like it), and then asked Ian Sattler about Final Crisis Aftermath. "During Final Crisis we ran those ads that said 'The Day Evil Won,'" Sattler said. "We started talking about what it meant to be a hero in the DCU, and what it meant to be villain, having survived these experiences and being in situations you couldn't punch or heat-vision your way out of," said Sattler of Final Crisis Aftermath. "I personally guarantee that there will be one moment in each issue you won't believe that we could do in the DCU."

The first book showed was Final Crisis Aftermath: Run!, with a slide of a cover featuring Human Flame. "The heroes hate him, the villains feel he sold them out to Libra," Sattler said. "His only choice is to run. This is a guy that feels the world owes him something, and he makes some terrible decisions. It tells you what life is like for an F-list villain in the DCU. It's fast-moving and a lot of people die. What else could you ask for?"

Now, Scipio of the Absorbascon has had great fun ripping on Silver Age Martian Manhunter foes, and had a brilliant run with The Story of the Human Flame, pointing out that the villain is pretty much the poster child for epic failure. I mean, he didn't even kill J'Onn. That was Libra, a '70s JLofA baddie who'd never even met J'Onn before. Why did this happen? Like Scipio, Grant Morrison owned a copy of Showcase Presents: Martian Manhunter, Vol. 1, and never bothered to research the comparatively awesome Mr. V or Prof. Hugo. I ended up hating Final Crisis, and counted many of the ways, but it may well have been worth all that hell to get a six issue Professor Hugo mini-series. Instead?

"The Human Flame will be one of the most powerful supervillains in the DCU by the time this is over."

For anyone familiar with the Human Flame, that statement by writer Matthew Sturges is hard to believe. But as writer of the upcoming six-issue mini-series Run!, which focuses on the formerly comical villain, Sturges said that not only will the Human Flame be a serious threat, but "there won't be anything funny about him anymore."

So "Run!" will be written by the man responsible for most of "Salvation Run," of which I wrote "if you were asked what was wrong with DC Comics under Dan DiDio, and you didn't have copies of Countdown handy, this trade would be an excellent alternative summation." So color me thrilled that he'll be guiding a character he rightly calls "a complete loser. I'd even go so far as to say that he is a complete douchebag" into some sort of powerhouse. For reals? Between this and that Black Lantern business, I'm now working under the assumption DC Comics exists to insult my sensibilities. I'm filled with dread when I read "And so to make him feel at home, we found a couple characters of his ilk and invented a couple others. And we're going to see what happens to him and them as they join forces for a short time." Based on how Psimon and the Brain ended up, I'm convinced a Professor Hugo memorial may be forthcoming.