Albon and Nordon were the self-proclaimed last survivors of an ancient alien race called the Krill. Their people having vanished eons prior, the pair were all that remained. Their long life bred incredible boredom, so they took to spying on others sentients from their vast alien space-station. Happening upon the Justice League of America and the despotic Despero, the Krill used their Spacial-Disruptor to emit a crystal light which teleported all parties into their mobile home. The Krill then encouraged Despero to battle the heroes in pairs, across various locations, and with weapons they provided. The Krill were ecstatic from the sensations these bouts instilled in them, and they intended to exploit their abductees indefinitely. However, Albon and Nordon were duped into fighting one another, allowing everyone else to escape. 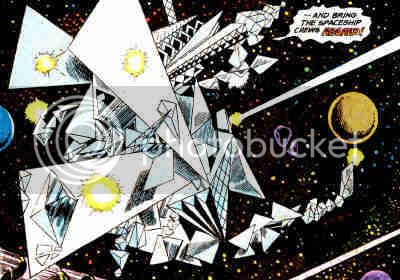 The Krill stood several stories tall, and their space-station was filled with extraordinary devices. From their Space-Time Observation Point, they could use a gleaming crystalline device to view the past on their triangular-jewel video-screen. They provided Despero with a rifle that could solidify air, as well as a force field that could withstand blows from Supergirl. The Krill could seemingly teleport most anything at will, and could control the minds of others. Their present whereabouts are unknown.

It looks like their biggest weapon was the killer paper airplane chains in space.