Sorry these are so late, but I forgot to mail order my copy of Previews, and didn't buy one from a brick and mortar shop until last week. 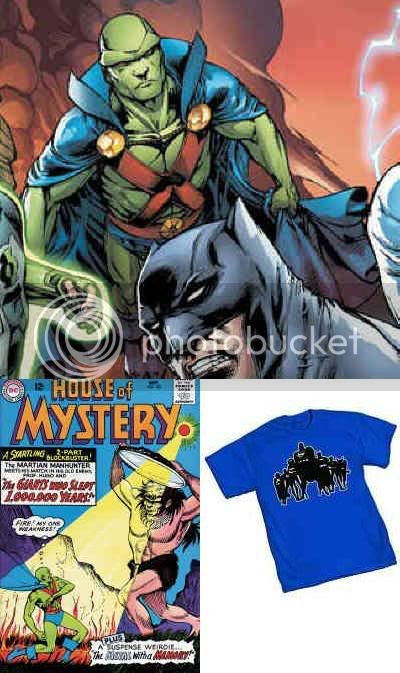 FINAL CRISIS HC
Written by Grant Morrison
Art by J.G. Jones, Carlos Pacheco, Jesus Merino, Marco Rudy, Doug Mahnke and Christian Alamy
Cover by J.G. Jones
The year’s most mind-blowing event is collected in this spectacular new hardcover featuring FINAL CRISIS #1-7! What happens when evil wins? That’s the devastating question Superman, Batman, the Justice League and every other super being in the DC Universe must face when Darkseid and his otherworldly legion of followers actually win the war between light and dark. Written by superstar creator Grant Morrison (JLA, BATMAN) with stellar art from J.G. Jones (52 covers), Carlos Pacheco (SUPERMAN) and Doug Mahnke (BLACK ADAM), this event defined the DCU and the New Gods for the 21st century and beyond!
Advance-solicited; on sale June 10 • 240 pg, FC, $24.99 US

See the Martian Manhunter murdered! Skip the funeral! Die in a fire!

THE HISTORY OF THE DC UNIVERSE NEW PRINTING TP
Written by Marv Wolfman
Art by George Pérez and Karl Kesel
Cover by Alex Ross
Don’t miss this new printing of the definitive history of the DC Universe. Featuring virtually every character in the DC Universe, this tale takes us from the dawn of creation to the end of recorded history and lays the foundation for adventures to come.
Advance-solicited; on sale May 13 • 104 pg, FC , $12.99 US

A great looking book that did a solid job of outline the Post-Crisis gestalt chronology on the new Earth. Too bad it's been added to and contradicted so often as to be an unreliable reference. I bought the original Graffiti Designs hardcover years back.

JLA DELUXE EDITION VOL. 2 HC
Written by Grant Morrison
Art by Howard Porter, Gary Frank, Greg Land, Val Semeiks and others
Cover by Howard Porter & John Dell
Collecting stories from JLA #10-17, PROMETHEUS #1 and JLA/WILDCATS in Deluxe format, this volume features the Justice League facing off against Lex Luthor's newly assembled Injustice Gang while the fate of the Earth itself hangs in the balance.
Advance-solicited; on sale June 24 • 320 pg, FC, $29.99 US

Tempting, but I have most of these books in trade or original editions already, and DC doesn't deserve to cash in on me again.

Must own. I'm looking forward to scanning and recoloring these stories to broadly expand the Vile Menagerie and other places. Plus, you guys can finally bask in the glories of Zook, Professor Hugo, VULTURE and... okay, there's no glory in the Diabolu Idol-Head. Those stories suck, and their inanity accounts for my co-opting them to name my blog.

TEEN TITANS ANNUAL 2009 #1
Written by Sean McKeever
Art by Fernando Dagnino & Raul Fernandez
Cover by Andrew Robinson
Prelude to the “Deathtrap” crossover between the pages of TEEN TITANS, TITANS and VIGILANTE! Titans Tower has mysteriously come to life to attack the Teen Titans! But The Titans have one secret weapon their unknown assailant doesn’t know about. Will they be able to use this weapon in time to save themselves? Find out as the story continues in TITANS #12! And be sure to check out the awesome interlocking covers by Andrew Robinson spanning the entire “Deathtrap” story that create one massive image!
On sale April 1 • 48 pg, FC, $4.99 US

Seriously, what happened to this team? Wonder Girl is the only founding member of the current incarnation left? Bombshell? Kid Eternity? Even the love some have for Blue Beetle and I have for the new Aquagirl doesn't mean this book could stink any worse of an inevitable Titans Hunt III (4, counting Titans East's fate?)

TITANS #12
Written by Judd Winick
Art by Howard Porter
Cover by Andrew Robinson
“Deathtrap” Part 1 of 5! Completely unhinged, Jericho continues his assault upon his former teammates. As if that wasn’t enough, he also draws the Teen Titans into his twisted plot. And the Vigilante makes it his mission to stop Jericho – permanently! Continued in VIGILANTE #5!
On sale April 8 • 32 pg, FC, $2.99 US

Pretty much any Judd Winick script is a death trap, isn't it?

VIGILANTE #5
Written by Marv Wolfman
Art by Rick Leonardi & John Stanisci
Cover by Andrew Robinson
“Deathtrap” part 2 of 5! After attempting to kill Cyborg, Vigilante has been locked up by the Titans. But Vigilante knows that there is a traitor in their midst, and he will use any means necessary to bring Jericho to justice – Even if that means killing all of the Titans to do it!
On sale April 15 • 32 pg, FC, $2.99 US

I thought Vigilante was so cool when I read his first appearances as a kid. The concept has since grown contemptible.

TEEN TITANS #70
Written by Sean McKeever
Art by Joe Bennett & Jack Jadson
Cover by Andrew Robinson
“Deathtrap” Part 3 of 5! Straight from the pages of VIGILANTE #5, the team gets roped into Jericho’s insane plot to take out both Titans teams. But how can they fight back against a menace who can possess their bodies? Continued in TITANS #13, on sale in May!
On sale April 29 • 32 pg, FC, $2.99 US

Evil Jericho? Again? Who set the Wayback Machine to 1992?

GREEN LANTERN CORPS #35
Written by Peter J. Tomasi
Art and cover by Patrick Gleason & Rebecca Buchman
Variant cover by Rodolfo Migliari
Prelude to BLACKEST NIGHT! “Emerald Eclipse” continues as a Red Lantern escapes out of its sciencell and ignites a riot on Oa, forcing Guy, Kyle, Kilowog and Voz to try and prevent the ultimate jailbreak. Meanwhile, Sodam Yat and Arisia arrive on Daxam to stop Mongul and the Sinestro Corps. But how can they hope to stop an entire Corps? Plus: Sinestro arrives on Korugan in search of his daughter!
On sale April 15 • 32 pg, FC, $2.99 US
Posted by Diabolu Frank at 7:00 PM

Looking forward to showcase #2, which will be in fact the first DC thing I will have bought since this past spring.

I admit my weakness. But the egeneral divorce still stands. :P

Like I said, there's some fun stuff in there, but also some of the best examples of terrible DC Silver Age storytelling on record. I don't think they'll be reprinting the Arnold Hugo lead store from 'Tec #306, so I'll have to cover it here before that Showcase ships...

Yeah, but I have a huge weakness for really bad old comic story lines. I like to mystie them in my head. :)

Some of those MM stories are good, others so bad they're good, and the rest imaginary tumors.

Mystie: To joke and make fun of a bad movie, comic, ect in the style of Mystery Science Theater 3000. :)