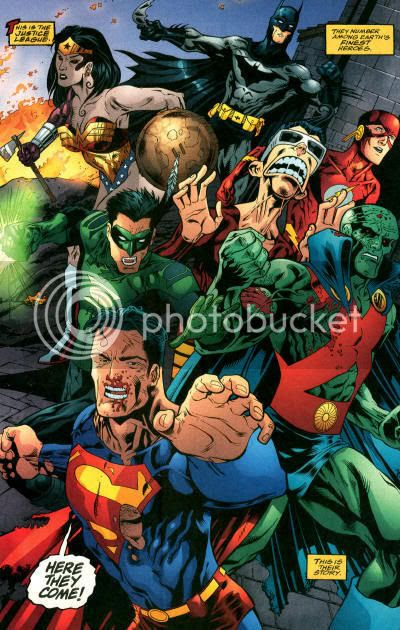 “Superman is not invulnerable to our adversaries. That suggests their nature derives from magic. However, they appear to be extremely vulnerable to heat, making fire our most effective weapon.” The Manhunter from Mars surmised this as he helped his fellows fended off the creatures’ latest assault. “Perhaps I can use my intangibility to get past these outer limbs... to the main body of the creatures!” Or perhaps not, as unearthly talons “...gaffed him like a fish... J’Onn’s in no condition to fight,” at least in the Dark Knight’s estimation. A shotgun-wielding Kishana Lewis fought to protect them both, earning the heroes’ respect, while remaining in their eyes a liability. Though Kishana's skilled use of firearms and evasive maneuvers made her seem at least as effective as the super-heroes, she tearfully fell back to look after the wounded J’Onn, as both were led back to safety by Plastic Man. On their way out, Superman couldn't help noticing what had drawn Kishana into the fray to begin with. "Interesting that J'Onn used his telepathy to reach out to Kishana."

With study, the Dark Knight Detective concluded of the Scary Monsters, “Their native environment must be absolute zero… They come from a dimension of primal cold. But each time they appear here, they’re stronger, smarter, more resilient.” Given a respite, Superman learned from the Carmody library that knowledge of the texts would not be enough to use the occult against the creatures. “Shamanic lore requires a spiritual aptitude, much like the metagene that conveys super powers, in those who seek enlightenment. You not only have to be born to the role, you also have to earn it by undertaking a series of ordeals.” On other matters, given Superman’s assertion about the creature’s natural habitat, Batman surmised, “On their side of the ‘door’ they’re static. Here, they evolve.”

Manhunter himself was evolving, as his shape-shifting abilities merely amplified the speed at which his septic wounds allowed their poison to turn him into a monster. J’Onzz envisioned the volcano we know as the Olympus Mons. “According to legend, it was created during a great and terrible battle for the soul, not only of the Martian race, but of our very world. Against a malevolence too awful to even name. The closest word we applied to them was-- Winter.” J’Onn drew Kishana into his mind, within which the monsters attacked the pair telepathically. “My heart is racing. It sounds like… drums… The pattern… it sounds African… It sounds Indian… Just like me… My blood-- feels like it’s setting me on fire!!” Kishana began to radiate heat, vaporizing the ice in their thoughts and cauterizing the Manhunter’s wounds clean. “The patterns of his life… are as clear to me as a trail of fire. The poison in him creates patches of darkness and cold. All I have to do is reignite the flames of creation… and I can make him whole.” J’Onzz felt reborn, and apparently aroused, as he kissed Kishana passionately...