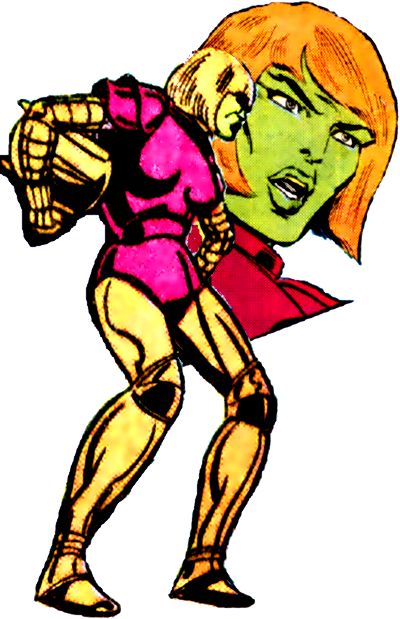 
History:
J'en was a young soldier on Mars II who was for a time the lover of governmental figure J'Onn J'Onzz. The couple drifted apart once J'en fall under the sway of the war-mongering Marshal, setting her against the Manhunter from Mars. Following years of incredible hardship on an adoptive world, the Marshal led J'en and his other Soldiers of the Red Brotherhood in a military coup.

As described by J'Onn J'Onzz, "There have always been those who dreamed of returning to Mars... I did not know how many, or how strongly they craved a return to what was no more... I looked at their faces, and I shuddered. Against such commitment, our leaders would be helpless. I looked again, and to my horror... I saw the face of the woman I loved. J'en... we shared our dreams, our fears... and I'd thought I knew her. I knew there was an anger deep inside her... I did not know how fierce an anger it was, until that moment... Within a week, the Marshal took command of the government. Those who resisted were imprisoned--or killed. I chose to flee...to warn the Earth... I barely escaped in a scout ship... and the Marshal's hunters were soon after me, J'en among them. We talked once over our communicators. We had nothing to say. We did not talk again..."

Fearing that J'Onzz's charisma might test the loyalty of any but his most trusted troops, the Marshal sent his personal guard in pursuit of the fleeing Manhunter. The Hunter Squadron was led by J'en, as they pursued J'Onzz's spaceship from a star in the constellation Cygnus across the light-years to Earth. Once J'en believed J'Onzz had met his end after taking fire over New York, the Hunter Commander returned to the Marshal's command vessel, as squadrons of Martians began an invasion of Earth. 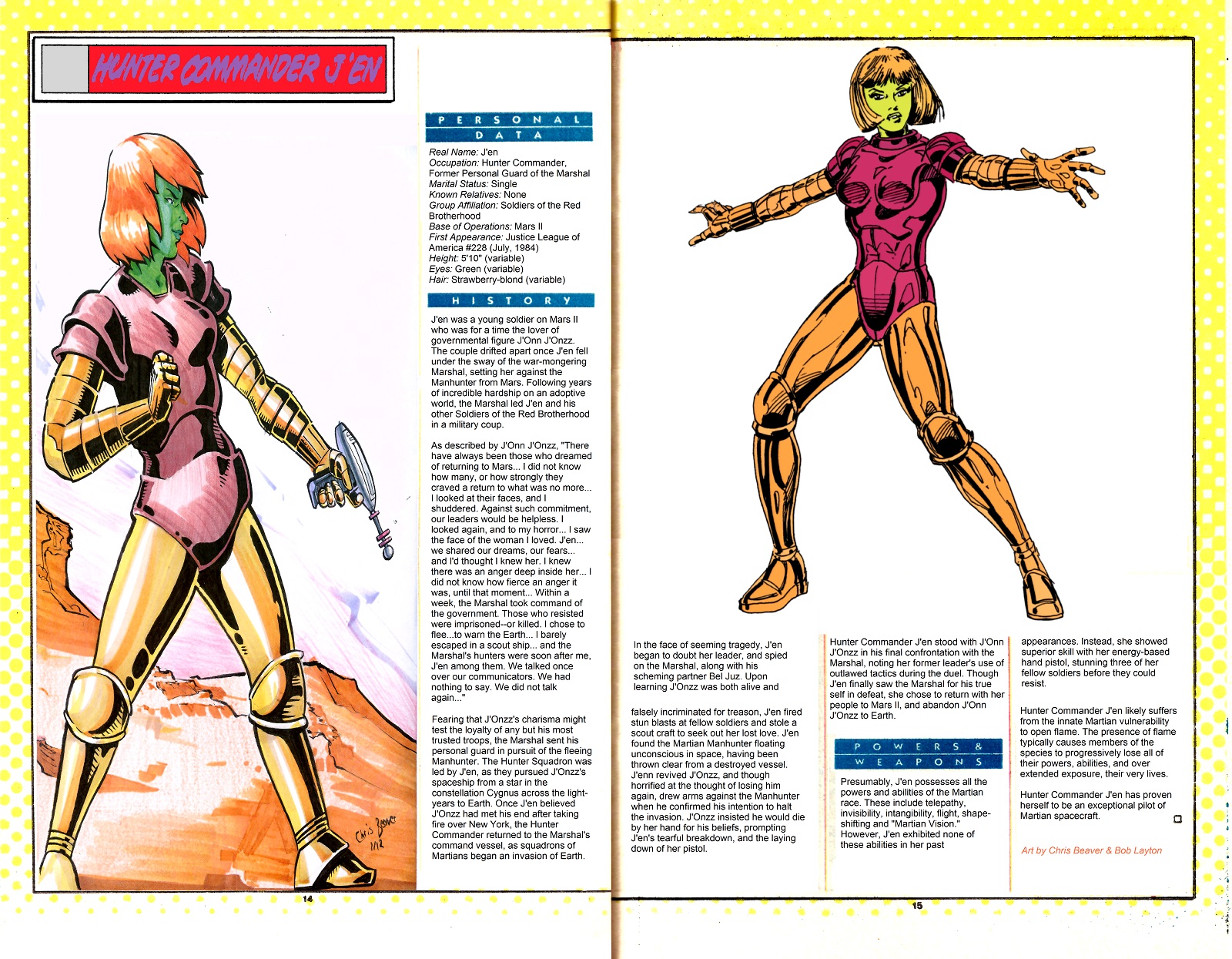 In the face of seeming tragedy, J'en began to doubt her leader, and spied on the Marshal, along with his scheming partner Bel Juz. Upon learning J'Onzz was both alive and falsely incriminated for treason, J'en fired stun blasts at fellow soldiers and stole a scout craft to seek out her lost love. J'en found the Martian Manhunter floating unconscious in space, having been thrown clear from a destroyed vessel. J'enn revived J'Onzz, and though horrified at the thought of losing him again, drew arms against the Manhunter when he confirmed his intention to halt the invasion. J'Onzz insisted he would die by her hand for his beliefs, prompting J'en's tearful breakdown, and the laying down of her pistol.

Hunter Commander J'en stood with J'Onn J'Onzz in his final confrontation with the Marshal, noting her former leader's use of outlawed tactics during the duel. Though J'en finally saw the Marshal for his true self in defeat, she chose to return with her people to Mars II, and abandon J'Onn J'Onzz to Earth.

Powers & Weapons:
Presumably, J'en possesses all the powers and abilities of the Martian race. These include telepathy, invisibility, intangibility, flight, shape-shifting and "Martian Vision." However, J'en exhibited none of these abilities in her past appearances. Instead, she showed superior skill with her energy-based hand pistol, stunning three of her fellow soldiers before they could resist.

Weaknesses:
Hunter Commander J'en presumably suffers from the innate Martian vulnerability to open flame. The presence of flame typically causes members of the species to progressively lose all of their powers, abilities, and over extended exposure, their very lives.

Distinguishing Features: J'en appears to be a member of the same green-skinned Desert Dweller culture as J'Onn J'Onzz.

Vehicles:
Hunter Commander J'en has proven herself to be an exceptional pilot of Martian spacecraft.

Quote: "Forgive me, J'Onn-- I'll never forget the love we shared, but you have betrayed our people... and you must die."

Created by: Gerry Conway and Alan Kupperberg
Posted by Diabolu Frank at 7:00 PM