Like a lot of modern readers, my Martian Manhunter fandom mostly began after the changes made to the character in his first solo mini-series. After decades as a bachelor, J.M. DeMatteis transformed the Martian into a mournful widower and father. As such, I, like I'm sure many of you, always thought of J'Onn as this lonely, tragic figure... and neutered. However, that vibe must have been exactly what he needed to begin pulling birds, because J'Onn has had more romantic entanglements since losing his retcon wife than the rest of his history combined! Who are some of these special ladyfriends, you may ask, so near to Valentine's Day? Here's a selection... 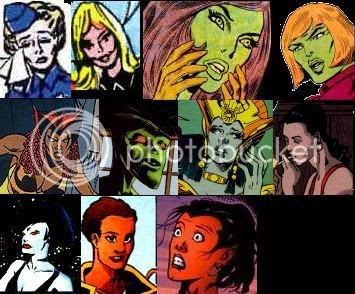 Labels: Martian Manhunter, Scorch, The Rock of the JLA

Yeah, I always thought it was rotten that J'onn never got a chance to really have any kind of meaningful relationship with a woman past a short term deal. I always liked Diane Meade, and I wish they had re-done her in the modern mythos as more of a pairing for JJ. While I really liked the long term love he felt for his late wife, it also struck me as kind of needlessly obsessive to have her as the only lover he could ever have.

Or I could just be a sappy girl who likes the idea of her favorite hero getting his own "Lois Lane" so to speak....

I'd have to disagree with you about Diane-- I think it's refreshing for a female supporting cast member to not fall for the heroic lead. I think that plays too much to the male power fantasy; that all women should lust for the male audience member living vicariously through his comic book surrogate. Now, the Silver Age and Modern Meades are pretty much completely different characters, but they're both dedicated police officers deserving proper respect. They're also fun to read as more than just love interests. Besides, the closer Meade gets to Lois Lane territory, the more she feeds detractors who claim the Martian Manhunter is nothing but a third rate Superman knock-off.

I'd like J'Onn to have a steady squeeze someday, but the one thing I'm surprised I can say is that he gets more romantic mileage than most classic DC heroes. Even Hal and Ollie have spent most of their years devoted to one woman. Aside from his wife, J'Onn's been a confirmed bachelor for more years than any of 'em!

Yeah, I can see your point about Dianne. I guess I just saw her as independent and a great character in her own right, and not prone to falling into that stereotype as "Just" the girlfriend.

I know what you mean though. It was one of the reasons I was bummed on "The X-files' when they finally made Mulder and Scully a couple. I liked them better as close friends/partners because I thought that fit them better.

Exactly! I want more Diane Meade, and a girl for J'Onn too! :)

Well, if they got him a girl who was an interesting character in her own right alone, then I may mend my ways with DC and end our divorce....

But of course, they have to bring him back from the dead before that.