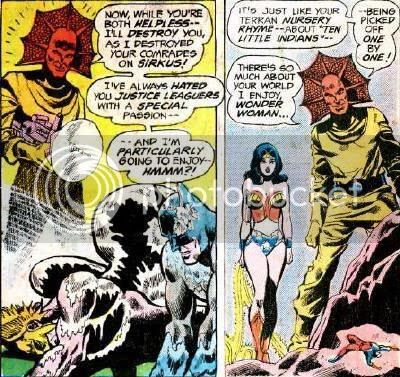 Despero had defeated the real Superman and an imitation Justice League in the previous issue. The despot next left his just-conquered planet Sirkus with these captives along with him (in suspended animation) on the journey to invade Earth. It just so happened his spacecraft was on a collision course with a Thanagarian star-ship in search of Superman containing Supergirl, Batman, Wonder Woman, Elongated Man, the Atom and of course Hawkman. From a third vehicle, the voyeuristic aliens Albon and Nordon watched. These last surviving Krill chose to intercept both vessels for their own good, as well as for their personal enjoyment. As he was teleported away while at the controls of his ship, Despero exclaimed "By the many moons of Mandigor! A ray-- hitting me-- making me fade away!"

The six questing heroes were just as shocked to find themselves whisked off to a hall also containing one of the JLofA's oldest foes. Elongated Man wasn't around for Despero's first or second assaults on the team, but his nose could smell the stink of villainy, and launched an offensive! Despero thought, "Eh...? The other Justice Leaguers? And-- Wonder Woman? How could that amazon have escaped? She-- eh? Who is this foolhardy freak attacking me--?"

Despero greeted Elongated Man with his third eye: "No one assaults Despero! Mine is the power of the mind unleashed-- a power that can punish, by causing your malleable molecules to stretch out of control-- or a power which can destroy!" E-Man let out a "EEEYOW" before Supergirl could fly his mishandled frame to a safe distance from Despero's wrath. Batman asked, "Is Elongated Man okay, Supergirl?" She cradled his limp but normalizing frame while answering, "I think so, Batman!"

After his devastation of an ersatz Justice League that included a faux-Wonder Woman, Despero was more cocky that ever... even when the true Amazing Amazon lunged at him, wanting answers! "Your question is irrelevant, female! The Kryptonian is indeed my captive now-- just as you have been!" While the Amazon Princess displayed incredible gymnastic maneuvers to evade destructive blasts from his third eye, Despero began to question just who were those super-heroes on ice back on his spaceship. "Obviously, either she or you is the impostor! For the sake of my ego-- I prefer to believe the impostor is youuuuuhh!" Wonder Woman tumbled into Despero, sweeping his legs out from under him. Disoriented and under too much pressure to think straight, he chose to avoid an interrogation from the Dark Knight. "On the contrary, detective... now is the time-- for escape!" With that, Despero vanished in the blink of an eye.

The Kalinorian ran through the vast alien space-station of the surviving Krill. "There must be someone aboard here-- unless it's fully automated! If I can find that someone, I can control him with my third eye-- then force him to explain the purpose behind-- eh? Unless I'm greatly mistaken, this is some sort of weapons chamber-- and the object on that pedestal-- a weapon!"

Just then, Albon and Nordon materialized two super-heroes into the room. "Batman-- and Hawkman! No time to learn the details of this device-- only time-- to use it! How perfectly ingenious! This weapon solidifies air-- making it a gluey mud! Fight your way out of that, you over-rated clowns! Now, while you're both helpless-- I'll destroy you, as I destroyed your comrades on Sirkus! I've always hated you Justice Leaguers with a special passion-- and I'm particularly going to enjoy-- hmmm?! What in the name of sanity is happening to me--? I'm vanishing-- again?"

Such quick work had been made of the Caped Crusader and Winged Wonder, Albon and Nordon were disappointed. "Obviously, this Despero is too powerful to battle these heroes with our weapons." They remotely disabled Despero's gun, and sent him to a desert to face Wonder Woman and the Atom, who encouraged Diana to "Hit 'im-- and hit 'im hard!" The Krill were similarly enthused. "Yes, female-- yes! Strike the scaled man!-- Strike him hard! Never have I felt such-- such ecstasy, Nordon!" The Tiny Titan dealt his own damage-- dive-bombing Despero's hypnotic eye. However, a lasso-produced sandstorm made it clear the flailing Atom had not disabled the orb. "You forgot my power of mental control, Atom! Through my third eye, Wonder Woman is now my slave-- and so she shall remain-- till the Justice League is destroyed!"

Five of our heroes had fallen before the extraterrestrial tyrant. "It's just like your Terran nursery rhyme-- about 'Ten Little Indians'-- being picked off one by one! There's so much about your world I enjoy, Wonder Woman... Perhaps that's why I wish to conquer it! I've often wondered about my little obsession... this craving I have to own the planet Earth! I imagine it has something to do with my childhood... not that it matters! I think I'll teleport us back to the alien space-station now! One of the other abilities of my third eye: I can move myself through space at will! Believe me... it's quite convenient!"

"The would-be kingpin from Kalanor" arrived at an observation deck alone. "Eh? Where is Wonder Woman?" The interloping Krill had struck again, changing Despero's company to that of the Elongated Man. "I wouldn't know, Three-Eyes-- Suppose you tell us? This is one situation where I don't feel like playing detective! Ralph entangled the Kalanorian despot, while his partner Supergirl snared Despero's feet. All three were then transported to a whole other, icy environ as they tumbled. The heroes were disoriented, with Supergirl asking how this came to be. "I always used to love a mystery, Supergirl-- but not when the prisoner is escaping!"

The Maid of Might blew Despero to the ground. Fatigued, Despero refused to carry on, but the mysterious aliens somehow turned his mind toward pure blood lust against Supergirl. "I'm sorry... I'm sorry, but I can't go on! Whenever I turn around, something happens... something I don't understand! I can't possibly fight under these conditions, you see-- I-- I-- I-- I must FIGHT! --I must KILL!"
"Now what? Has Despero gone insane?"
"Trying to choke an invincible girl like you? He's gotta be crackers! Might as well knock the guy out of his misery! Huh? One of my best punches-- and he's still moving?"

"Fight! Must-- FIGHT!" Despero's suddenly superior strength tapped Elongated Man out with a left hook. Supergirl repeatedly batted the deranged despot away, only for him to shrug off her blows, rising again and again! "Great Krypton-- this is getting monotonous!" Supergirl finally spotted Albon and Nordon watching in the distance, which shouldn't have been much trouble, since they stood several stories tall. Supergirl determined the aliens were getting their jollies off the violent bouts, and offered, "A suggestion, Krill! If you want real excitement-- why don't you each choose sides?" Obviously not a good judge, seeing as Supergirl was comically holding back Despero's swinging fists with her palm to his brow, Nordon bet on the Kalinorian. "Don't be an idiot! Despero can't possibly lose-- not with the force-field we've given him!"

Well... "I've thrown Despero hard enough to put him into orbit!" Then... "I'm counting on a force-field, my alien friend! Nothing else could explain Despero's invulnerability! Unfortunately, not even the best" could withstand one of Supergirl's fiercest blows. However, either Nordon got so excited he forgot who he'd championed, or else scripter Gerry Conway did, since he proclaimed himself victorious. This provoked Albon to sock him in the kisser, and the last two Krill became enemies.

The Justice League escaped the Krill in Hawkman's ship, along with Superman, and a Despero bound by Elongated Man in tow. While all ended well enough, Supergirl felt guilty. "After all, we did introduce the last survivors of an ancient race to war!" Wonder Woman chimed, "And that's a curse I wouldn't even wish on Despero!"

"The Battle at the Edge of Forever!" was created by Gerry Conway, Dick Dillin & Frank McLaughlin. It seems like Gerry Conway wrote the first script, then a month later the second, based only on a vague recollection of the first. Issue #133 really only features one actual League member, and while it was interesting to watch Despero tear the fake batch apart, it was ultimately pointless. Then in #134, only a random sampling of League members from the first chapter appear, and the only elements of the previous chapter carried over in a significant way were Superman as a captive and the presence of Despero. Speaking of which, Despero's accomplishments were mostly due to the alien interlopers, whose story is wrapped in slapdash fashion, and by a non-Leaguer to boot! A bit of a mess, this one was. Dick Dillin & Frank McLaughlin are better on the art front, though their hearts always seemed to belong more to the look of newspaper romance comics than sci-fi super shenanigans.
Posted by Diabolu Frank at 8:00 PM

If you were writing a thousand pages a month like Gerry Conway at the height of his powers, you might get confused sometimes, too.

Oh, I'm pleased Conway was so prolific. A lot of Silver Age DC fans hated his guts for turning out so many Marvelized scripts, but I dug them more often than not. He just got sloppy on the regular, but I'll take that over organized dullness.